America has the SEMA show in Las Vegas, Europe has the Messe Essen tuning show. Full report and picture gallery 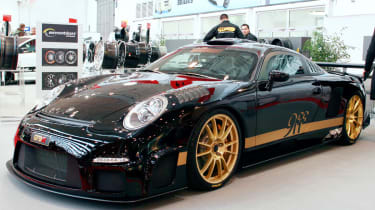 Europe’s answer to the SEMA show that’s recently closed its doors the other side of the Atlantic, the Essen Motor Show is home ground for the big dogs on the German tuning scene.

General consensus has it Essen’s glory years are perhaps behind it but the organisers still put on a great show thanks to local heroes like Brabus, based just down the road in Bottrop. Pride dictates it brings something spectacular to the show, this year’s offering being its new SLS carbon fibre Widestar conversion. No power upgrades yet for the Gullwinged Merc, bar a 10hp boost from the titanium exhaust, but Brabus says the new 250mph speedo points at what it’s got in store and a spokesman said to expect more news come the spring.

Fellow Mercedes tuners Carlsson also have new booty on show, a new C63 AMG derived CK63RS alongside its SL65-based 750hp C25 mega coupe. Good looking engines are few and far between these days but if the CK63RS’s 600hp conversion for the AMG 6.2-litre V8 goes half as well is it looks we’re in for a treat. Cool bonnet bulge too.

Away from the main showfloors halls with parts, custom cars and live action arenas prove Essen is still a force to be reckoned with and close enough to make a day trip worth considering. See www.essen-motorshow.de for more info.