The turbocharged Honda Civic proves its dominance on the high-speed Thruxton circuit with two 1-2 finishes. Report and gallery here 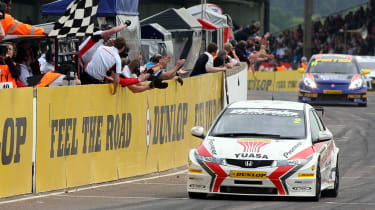 Following two podium finishes at Donington, the Honda Racing Team Civic continued its bid for the Championship at Thruxton, Round 3 of the Dunlop MSA BTCC. Gordon Shedden and Matt Neal took a 1-2 result in race 1, and after a penalty was given to Andrew Jordan in race 2, they scored a second 1-2 finish. Jason Plato took the third win of the day in the Silverline Chevrolet Cruze, recovering well from a crash caused by a puncture in the first race.

Gordon Shedden took pole position in qualifying, the third time a Honda has been at the front this season. He went on to take the win after leading the whole race, beating team mate Matt Neal by an astonishingly close +0.256s. Andrew Jordan in the Pirtek Racing Vectra took third, followed by Tom Chilton in the Global Ford Focus, and Tom Boardman in the STR SEAT Leon. Jason Plato looked strong, qualifying fifth, but the punctured tyre ended his race early.

Race 2 saw Matt Neal storm ahead of the pack to take the win, his third of the season. Andrew Jordan finished in second, but was penalised for an on-track indiscretion, meaning a position swap with third-place Shedden. This gave the Honda Racing Team the second 1-2 finish of the day.

After once-again rebuilding a damaged Cruze, the RML mechanics were delighted to see Plato take the win in race 3, just beating Mat Jackson in the Airwaves Racing Ford Focus. Third place was awarded to Tom Boardman in the SEAT Leon, his first podium of the year.

After his two podium finishes, Matt Neal commented: 'We’ve had a great day – a pair of 1-2 results for Honda plus a bucketful of points at what in the past has been a bit of a bogey track for me. We’re flying at the moment and we need to because it is starting to get very, very competitive at the front. We need to keep banging in the results because it isn’t going to go all our way at every event.'

Neal (90) has built up a 12-point lead over Mat Jackson (78), who have both overtaken previous leader James Nash (75) in the Drivers' Championship standings. Andrew Jordan (69) is fourth, with Gordon Shedden (65) in fifth. The next race will be held at Oulton Park on 5 June. For more detailed race results and championship standings, visit www.btcc.net.