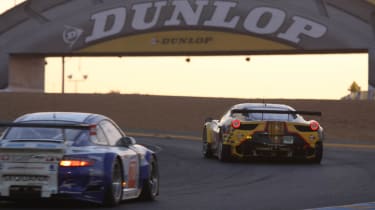 The 2011 Le Mans 24-hour race will be indelibly etched into the minds of many as one of the most exciting in recent times. The top billing of Audi vs. Peugeot saw a huge build up prior to the race with parochial feelings aired in the paddock for the two heavyweights before a tyre had even turned. While the Audi was superior in aesthetic terms, Peugeot had the upper hand in the economy stakes, requiring fewer refuelling stops than the faster but thirstier German car. Allan McNish started fifth on the grid and put in a storming performance during the first half hour of the race to pilot his Audi through the swathe of Peugeots ahead and claim second place behind team mate Timo Bernhard.  The Scot struck trouble though when attempting to take the inside line on a Ferrari that had held up first-place Bernhard. McNish clipped the slower GT class car, sending his car flying into, and almost over the safety barrier and into the marshalling area before coming to rest upside down in the gravel trap. McNish survived the experience relatively unharmed, walking away from the accident after his car had been righted. As night descended the Audi of Mike Rockenfeller also clipped a Ferrari with a similarly destructive result, his car being reduced to shards of carbonfibre from the impact and Rockenfeller being held overnight in hospital for observation. This left only one Audi still running for the team keen to claim a tenth Le Mans 24-hour title. The LMP2, GTE Pro and Am classes also experienced heavy loses with the inner inspection area of the pits looking like an exotic breakers yard with Aston Martin, Ferrari and Corvette among the brands sitting forlorn and broken from accidents around the track in a race which saw only half of the 56 starters reach the finish line after 24 gruelling hours. In the end Andre Lotterer at the wheel of the No.2 Audi shaded the Peugeot of Sebastian Bourdais by just 13.854sec after 355 laps with a further trio of Peugeots filling the top 5 places.