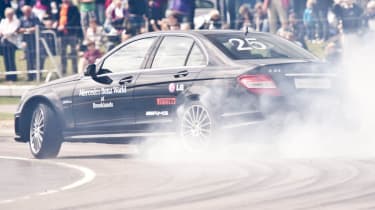 Friend of evo Mauro Calo has broken the world drift record. He kept a Mercedes-Benz C63 AMG sideways for 2308 metres, or 7572 feet. This breaks the previous record by 394m or 1293ft. That equates to 8.5 laps of the Mercedes-Benz World perimeter track. 12 laps had been the aim, but a delaminated tyre meant Mauro had to call time on his drift. ‘A rear tyre started to delaminate, so I kept going until I knew I’d broken the record then thought I’d better stop.’ ‘It went really well though, and the car held up – the C63 is great for this sort of thing. The weather was bone dry, which made things easier for me but harder for the car.’ Unsurprisingly, Mauro is over the moon. ‘I’m absolutely chuffed with breaking the record’. He’s eyeing up more world records in the future, too. Next up could be the world blindfold speed record. ‘There’s nothing planned yet, but it’s something I’d love to do’. He’ll have to travel faster than 182.03mph, the current record set by Metin Senturk, a Turkish folk singer, in a Ferrari 430 Scuderia.