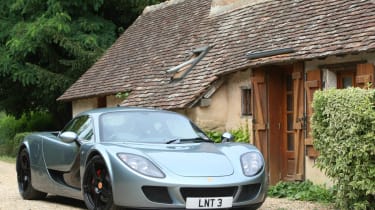 There’s a new Ginetta coming. The Yorkshire-based British sports car maker has teased a new model, set to be unveiled next week. It’s described by the company as a ‘£68,000, full carbonfibre bodied, 3.7-litre sports car, weighing less than 1100kg and delivering 310bhp at the wheels with a top speed of 165+ mph, 0-60mph around 4sec’. No further details or pictures have been revealed, but it’s possible that it will be the first reveal of the production version of the F400, the Ginetta-badged Farbio sports car that has been in development since last year. It’s set to gain a G-badge (in line with Ginettas past and present, from G20 to G55), and will sit in the Ginetta sports car range above the £30K, Lotus Elise-rivalling G40.

Going by the numbers, this new model looks set to battle the Lotus Evora S and Porsche Cayman R. Come back to evo.co.uk on Monday for more news on the latest British sports car.

Farbio GTS takes on Porsche and Lotus in 2009