Ginetta overhauls the Farbio GTS to create the G60, its first mid-engined sports car in 20 years 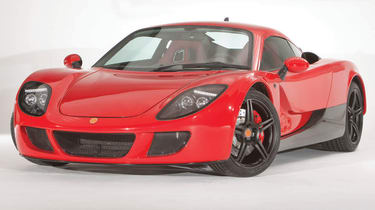 Ginetta’s new sports car has been revealed. The G60 may look incredibly similar to the F400 prototype it supercedes – itself a fettled version of the Farbio GTS – but beneath the skin is a host of key changes.  While F400 production had begun, Ginetta boss made the decision to halt the run and overhaul the car. Only the Farbio’s exotic, distinctly mid-engined styling remains, with some minor aerodynamic tweaks and a revised splitter among its few tweaks. Under the carbonfibre body is a new tubular steel chassis, housing a 3.7-litre naturally aspirated V6 engine. A Ford Cyclone unit, it produces 310bhp at 6500rpm and 288lb ft at 4500rpm, figures which compare relatively well to rivals such as the Lotus Evora S and Porsche Cayman R when the Ginetta’s welterweight 1080kg is taken into account. The resulting 292bhp/ton power-to-weight figure comfortably trumps the Cayman’s 255bhp/ton and Evora’s 245bhp/ton and helps propel the G60 from 0-60mph in 4.9sec and onto a 165mph top speed. The rear wheels are driven via a six-speed manual gearbox and a limited-slip differential, while suspension uprights and wishbones have been refreshed. There’s a refreshing lack of what Ginetta calls ‘nanny aids’: the brakes aren’t servo assisted and there’s no power steering, traction control or ABS. The F400’s braking system has been completely replaced, however, with new (four-pot) calipers, discs (356mm front, 355mm rear), pads and a new handbrake. The driving position has been changed, with a realigned pedal box, the throttle pedal even getting vertical grooves instead of horizontal to apparently deliver smoother control. The G60’s lack of compromise dynamically doesn’t extend to the interior spec; there’s sat-nav, climate control and Bluetooth controlled via a dash-mounted 7in touch screen. Such kit helps justify the Ginetta’s steep £68,000 price tag, as does the strict annual production of just 50 G60s for worldwide sale. A Cayman R or Evora S will set you back less than £60,000. The lighter, more focused G60 could just trump them both for driving appeal though when it joins the new G40R in the Yorkshire firm’s road car range. We’ll find out when we drive it in a couple of weeks. Customer deliveries begin in February 2012.