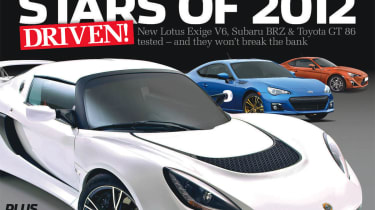 Buy a copy of evo 166 in our online shop

NewsAt last! The Honda NSX returns. And we’ve got all the details

LettersIt’s Monkey v evo reader, Jag XJ220 v McLaren F1. Which is better? There’s only one way to find out…

Lotus SpecialIt’s over a year since the Lotus revolution began. It may seem all supercars and celebrity name-drops nowadays, but it’s still working on its bread and butter: hardcore sports cars. We drive the new V6-equipped Exige, and have an exclusive go in the GT3 RS-chasing Evora GTE. Harry Metcalfe then spends a day with Lotus’s controversial boss, Dany Bahar, and we look at the brand’s ambitious motorsport programme

GT-R LEJOGLand’s End to John O’Groats in 24 hours, no motorways allowed. Is it possible? Henry Catchpole gives it a shot in the new 2012 Nissan GT-R. Place your bets now

Nissan Juke-RIs the GT-R not ‘school run’ enough for you? Try this instead…

Track battleIt’s a fight for the front-wheel-drive lap record as new Honda Civic Mugen 2.2 and the Renaultsport Mégane 265 Trophy go toe-to-toe at Bedford

Buy a copy of evo 166 in our online shop