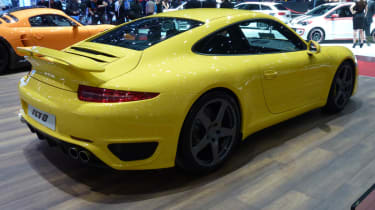 8
Ruf has unveiled its new RGT8 at the Geneva motor show. It’s the company’s interpretation of a V8-engined Porsche 911, and after its 2010 launch in 997 guise, there’s a new, 991-based model.
Porsche’s tried and tested flat-six drivetrain makes way for a flat-crank, dry sumped 4.5-litre V8. It’s naturally aspirated, and delivers 542bhp and 369lb ft of torque to the rear wheels. It serves up more power than the Porsche 997 GT2, but without that car’s twin turbos. And Ruf is keen to talk up the V8’s rev-happy nature and scintillating soundtrack. Its top speed is 198mph, and the RGT8 can be specced only with a six-speed manual gearbox.

Subscribe today to have every issue of evo delivered straight to you. You'll SAVE 39% on the shop price, and get evo for its original cover price for a whole year!
Subscribe now
Also on Ruf’s Geneva 2012 stand is a stretched Porsche Panamera, the RXL. The wheelbase has grown significantly – up 400mm – with the fitment of new 22in alloy wheels helping to disguise the car’s sudden change in proportions. It’s still noticeably longer than a Panamera, and apparently hits the spot for a number of customers who’ve complained of too little interior space in Porsche’s five-door saloon. It’s powered by a 414bhp/384lb ft 4.8-litre V8 engine, uses a PDK transmission and tops 170mph.
Ruf’s flagship model – the extraordinary CTR3 – has also been upgraded with a new Clubsport package. Inspired by a host of legendary Le Mans racers, there’s a new fixed rear wing and a plethora of carbonfibre additions for the exterior. With a twin-turbo 3.8-litre flat-six at its heart, there’s a startling 740bhp and 708lb ft on tap – enough for a 230mph top speed.
Advertisement
Advertisement - Article continues below
Review of the Ruf CTR3 here
Check out our A-to-Z list of stories from the 2012 Geneva Show
Follow us on TwitterFollow us on FacebookEmail us
Advertisement
Advertisement