Eterniti pulls the wraps off its Artemis super SUV at the 2012 Beijing motor show: meet the 600bhp, £252K Cayenne 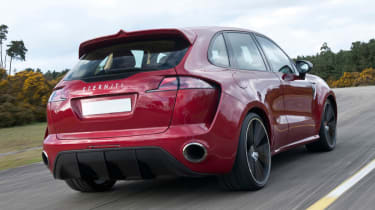 Eterniti Motors has unveiled its super SUV, the Artemis, at the 2012 Beijing motor show. Aimed primarily at Asian car markets, London-based Eterniti aims to build 50 examples of the Artemis by 2013 and 300 by 2014, each one costing in excess of £210,00 plus taxes – that’s £252,000 including VAT in the UK. The Beijing unveil has seen a change in name for Eterniti’s SUV, from Hemera to Artemis, a name borrowed from a Greek goddess of the moon. Eterniti released teaser images of the Hemera back in mid 2011, but this is the first confirmation of technical specs and the finalised look of the car. Former Formula 1 driver Johnny Herbert and Le Mans engineer Alistair Macqueen have led the development team on the Artemis, which uses Porsche’s Cayenne Turbo as a base car. The Cayenne’s 4.8-litre twin-turbo engine’s power has been lifted from 493bhp to 600bhp, while torque rises from 516lb ft to 553lb ft. The gains are courtesy of some light tuning and a tweaked exhaust system, including the removal of two cats, ensuring the Eterniti is as loud as it looks. It’ll complete 0-62mph in 4.5sec and top 180mph. The interior is completely handcrafted at Eterniti’s London production plant with options including fine leathers, quilted undercarpets and boot trim, lambswool rugs, natural wood, piano black and carbonfibre veneers, starlight rooflining and top spec audio systems. The restyled body panels of Eterniti’s super SUV – made from carbon composite - are also handbuilt and finished in any colour the customer chooses. Lightweight 23in forged alloy rims sit snug in low profile 315/25 tyres. Eterniti has described the Artemis as the ultimate crossover; compared to a Cayenne, it has 100mm of additional rear legroom in a limousine-like rear cabin, with twin reclining seats, both with heating and cooling, iPad holders and a drinks chiller. This satisfies a specific need, ideally for the Asian markets, which desires a car suitable for both chauffeur driven trips and driving for pleasure.  Eterniti has beaten its super SUV competitors (Bentley, Maserati and Lamborghini) to market, with production beginning this summer and the first cars going to buyers in autumn.