Dates and details of the 2012 RAC Future Car Challenge, a Brighton to London run for green cars 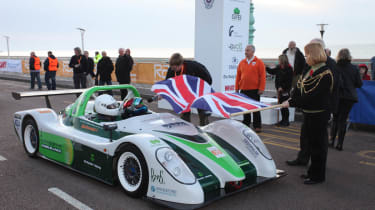 November 2012 will see the third RAC Future Car Challenge take place. It centres around a Brighton to London run, which showcases clean-thinking cars. Electric, hybrid, hydrogen, petrol and diesel cars all feature, competing to win their relevant categories. The challenge also aims to extract economy data from the cars when they're put to some real-world use. The event attracts entries from manufacturers, research institutes and individuals, with production cars competing alongside prototypes. In 2011, the event was won by Gordon Murray’s T.27 city car concept, while the decidedly more conventional Volkswagen Golf blue e-motion EV took the production car crown. The cars will drive a 63-mile route from Britain’s south coast to the centre of London, finishing off at the Regent Street motor show. Like the rest of the event, it’s free to view, and is focussed on green technology. The 2012 RAC Future Car Challenge takes place on November 3 to 4. There’s more information at www.futurecarchallenge.com