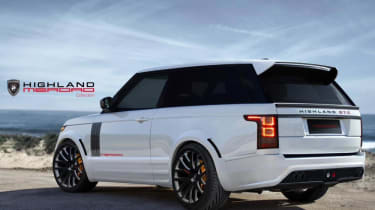 The Range Rover has long represented an overlap of posh form and utilitarian function, but Merdad’s new two-door version sacrifices usability in favour of vanity.  Merdad Collection – based in the UK in Northampton - has developed the Highland GTC, a coupe version of the 2013 Range Rover. A decidedly less-than-subtle body kit flares the bonnet, side skirts, rear bumper and wheel arches. Rounding out the Highland’s new coupe image is larger doors, a modified roof and larger split-spoke wheels, as well as a colour-matched rear spoiler. After all of the Merdad body modifications, the SUV measures 92mm wider than stock form. The Highland GTC also gets an electronic module which can lower ride height by as much as 40mm. This isn’t the first such experiment for Merdad Collection – in 2010 the tuners transformed the Porsche Cayenne SUV into a 2-door coupe. Those craving the regular Range Rover’s practicality can also apply Merdad styling upgrades to a five-door body, the Highland MC. Merdad offers four versions of tuned Range Rovers, starting with the base 3-litre five-door at 209,000 US Dollar (£190,000) and topping out at the 485,000 USD (£320,000) GTC Coupe.