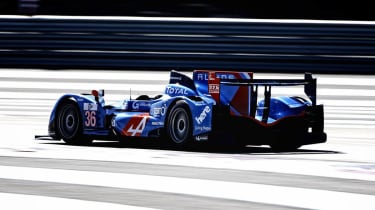 Alpine has successfully taken the 2013 European Le Mans Series title in the re-born team’s debut year. The title came after the Alpine A450, driven by Nelson Panciatici and Pierre Ragues, took a trio of podium finishes throughout the season.

Alpine teamed up with well-known endurance team Signatech, running the A450 in all five rounds of the ELMS 2013 season, as well as the LMP2 class of June’s iconic round-the-clock race at Le Mans. Tristan Gommendy made it a three-man team at the Le Mans 24-hour race, with the team placing 9th place in class.

The team came close to losing the ELMS title in the final race at the 3 Hours of Paul Ricard, thanks to a defective steering wheel, but thanks to a quick pit stop and some detrmined driving – the number 36 Alpine took the championship title.

It’s 35 years since the Alpine-Renault A442B’s iconic victory at the Le Mans 24 hours, with Jean-Pierre Jaussaud and Didier Pironi at the wheel. And the French carmaker's wish for some modern day glory has come true, as it relaunches its sports car business with a new mid-engined Caterham relative.