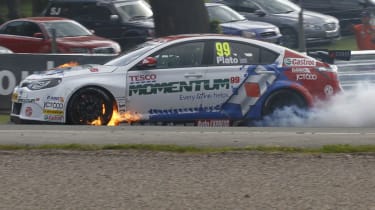 Jason Plato won two of the three races at the latest British Touring Cars event at Oulton Park, but a run of consistent finishes allowed Matt Neal to hang on to the championship lead.

Plato impressed in winning races one and two from pole position, heading his new MG team-mate Sam Tordoff in the opener before heading reigning champion Gordon Shedden in the second. But Plato’s chances of completing a hat-trick of wins in the reversed-grid race three were ended by a fire on his MG6 in the early stages.

That third race was by far the most entertaining race of the day, with Pirtek Racing Honda Civic ace Jeff Smith building up a lead as he went in search of his first-ever BTCC win. But, running on the quick-wearing soft tyres and coming under pressure from team-mate Andrew Jordan, Smith lost control and ventured across the grass with four laps to go, allowing Jordan through to seal his second win of the season.

As for Neal, he finished sixth, fourth and fourth in the three races, keeping him just three points ahead of Jordan and seven clear of Plato as the season nears its halfway point.