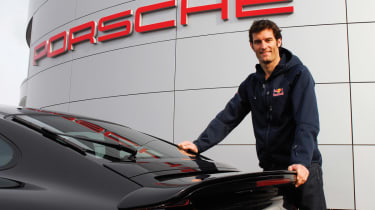 Porsche is returning to the Le Mans 24-hour (and World Endurance Championship) top flight next year, a race it has seen victory in 16 times. Webber is no stranger to Le Mans either, famously suffering a scary 200mph flipping in 1999 in his Mercedes. He came off remarkably unscathed, but after the crash said he would never return to Le Mans, as the dangers were too great. But then one of the biggest names in motorsport (and the maker of the 911 GT2 RS he dotes over) came knocking at his door…

Porsche will battle for outright victory with Audi and Toyota; the former has just returned from La Sarthe victorious for the 12th time in the last 14 years. With its past winning record and Webber’s illustrious CV (11 F1 poles, 9 wins, 36 podiums), Porsche looks a better bet than anyone to topple Audi’s dominance.

Webber said ‘I'm very much looking forward to this new challenge after my time in Formula 1. I can hardly wait to pilot one of the fastest sports cars in the world’. He has signed a contract that ‘extends over several years.’

Rumours about Webber leaving F1 have been swirling for some months after the very public spat between him and his teammate Sebastian Vettel. There has also been a string of quotes where Webber has criticised recent rule changes, such as DRS and Pirelli tyres, claiming such artificial measures are more appropriate for the likes of WWE wrestling, making a career change seemingly inevitable.

Kimi Raikkonen has gone straight to the front of the queue to fill the hole he leaves at Red Bull, while Toro Rosso’s Daniel Ricciardo and Jean-Eric Vergne are other options.