Porsche returns to the top class of Le Mans - LMP1 - in 2014 with the 919, aiming for overall victory. Pictures and latest details of its car here 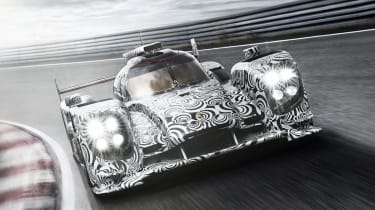 Porsche has revealed more details of its return to Le Mans. The company’s LMP1 car will challenge Audi and Toyota for top honours in 2014, hoping to add to its long list of Le Mans 24-hour victories. Big news is that the car will feature a new hybrid drivetrain, powered by a four-cylinder engine combined with a battery and large electric motor. It has been named 919, linking it to to the road-going 918 Spyder. A disguised LMP1 test car has already been photographed at Porsche’s Weissach test track, but the LMP1 car has concluded its 2013 testing programme. Testing was completed at the Autodromo Internacional do Algarve near Portimao, Portugal, with the racing car still in camouflage.

Headlining its driving team is Mark Webber. The Formula 1 driver is leaving the Red Bull team at the end of the 2013 season, returning to the endurance race where he was infamously involved in a rather airborne crash in a Mercedes CLK GTR. Despite his contract not ending until the end of the year, Red Bull allowed Webber to take part in the 2013 test of the new racer.

Other drivers Timo Bernhard, Romain Dumas and Neel Jani have also been confirmed. The first pair are both previous Le Mans 24-hour winners and are Porsche works drivers, piloting a 911 RSR each in the 2013 World Endurance Championship.

The car itself isn't wholly dramatic looking, echoing the shapes of the current LMP1 leaders - the Audi R18 e-tron Quattro and Toyota TS030 Hybrid - with a more intricately shaped rear diffuser and more Porsche-like rounded front lights the key differences. Let's hope the livery that replaces the swirly camouflage come June 2014 is a bold and emotive one... Porsche is taking its LMP1 project very seriously, building a new workshop and admin building and hiring 200 new workers. And the inevitable links to road cars are already being promoted. ‘The engineers were able to start with a blank sheet of paper in the design of the new LMP1 car’ said Matthias Muller, Porsche AG chairman. ‘They were able to apply many new technologies within the framework of the regulations that will also benefit the customers of our road legal automobiles in the future. After all, there’s a race car in every Porsche.’ For the additional excitement Porsche will inject into Le Mans, though, we can endure a little PR speak.