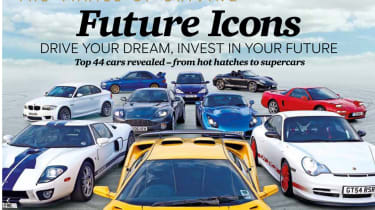 Buy a copy of evo 188 in our online shop

News Ferrari goes gunning for McLaren with a new 458 that’s special in more ways than oneFirst drivesLexus TMG TS-650, Alpina B3, Ford Fiesta ST Mountune, VW Golf GTD and a host of other new cars get the evo once-over ColumnsHarry’s trying not to bankrupt evo, while Porter’s been buying a new dishwasher LettersThe Nissan GT-R had to come second in a test eventually, but that hasn’t stopped one reader’s fury

Future iconsThere are plenty of great performance cars offering decent value used. But only a select few cars – those celebrated and with real drama to their creation – should hang on to their value and reward in years to come. We detail the best investments and then drive our top ten

Future supercar?Possibly destined to be a landmark point in the history of the supercar, we drive the petrol-electric BMW i8New 911 TurboRecalibrating the word ‘supercar’, meanwhile, is the new 911 Turbo, with unprecedented levels of technology and aeroMaserati road tripAs Maserati heads towards the mainstream, we indulge in some good old grand touring in a GranTurismo SportTom HuntWith the year’s big car film Rush in cinemas imminently, we chat to the son of F1 legend James HuntGolf GTI v rivalsThe new mk7 GTI doesn’t just have to fend off fast Fords and Renaultsports – a couple of posher rivals aim to duff it up from the other direction Tyre test 2013Time to pick your new performance rubber, as our in-depth tests select the best summer tyres on sale

Long-Term tests The Mini GP and Focus ST torque-steer their way towards the office hedge, while we trade one Audi RS for anotherevo knowledgeJust how much of the world’s fossil fuel reserves will a Mazda RX-8 pillage? Our buying guide reveals all Art of SpeedWhy is the Bugatti Veyron SS’s submerged inlet cool? Because it’s commonly called a NACA duct…

Buy a copy of evo 188 in our online shop