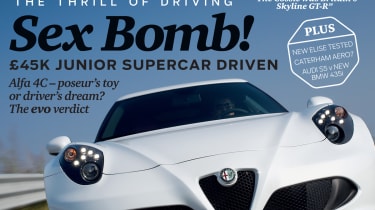 Buy a copy of evo 189 in our online shop

News BMW spills the beans on its new M4, while Audi moves forward with its new Quattro plansFirst drivesLotus Elise Club Racer, Rolls-Royce Wraith, BMW 328i GT, Vauxhall Insignia VXR Supersport, Mercedes S63 AMG, BMW X5 and a host of other new cars get the evo once-over ColumnsHarry reckons electric vehicles have an image problem, while Porter fears for the V8 engine LettersLast month’s Future Icons stirred you into action to point out the potential gems we missed

Alfa Romeo 4CThe supercar for everyman that could revitalise one of motoring’s most famous marques. Dickie gets his hands on the beautiful 4C in ItalyLamborghini Gallardo Squadra CorseThe most extreme Gallardo ever made, and the very last one. We promise. ProbablyTony FernandesHarry grills the Malaysian magnate on how he plans to turn Caterham into a global force…Caterham Aeroseven…plans that start with a carbon-bodied 21st-century take on the stalwart SevenAston Martin V12 Vantage SHenry puts a bright yellow Vantage through its paces in rural California. Definitely doesn’t look conspicuous…Track Car of The YearFrom extreme hot hatches to single-seaters for the road: eight machines do battle for our track car gong at Blyton Park Ford Sierra RS500 CosworthA mind-scrambling saloon that went unbeaten in the BTCC for three years. We revisit one of the maddest cars of the ’80s

Buy a copy of evo 189 in our online shop