Detroit motor show 2014 round-up: Pictures of all the best cars

From the wild new Toyota FT-1 concept to Chevrolet's 625bhp Corvette Z06, here are the evo stars of the 2014 Detroit motor show 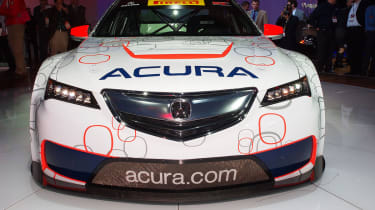 The 2014 Detroit motor show, officially known as the North American International Auto Show, has once again been the curtain raiser for many exciting pieces of new metal. With manufacturers releasing both innovative concepts and production ready vehicles, the show has provided the motoring world with both excitement and surprise. We take a look at a few of the best cars to face the public at the 2014 show.

Undoubtedly one of the most exciting designs of any car that we’ve seen for some time, the FT-1 Concept, labelled as the design forefather for a potential new Supra, is almost certainly the most talked about car of Detroit 2014.

Featuring an F1 inspired nose to slash airflow between two front air intakes, the FT-1’s long bonnet and short roofline almost hark back to the Supra mark four’s legendary design. As a result, the purposeful styling of the latest Toyota creation has become an immediate hit amongst the motoring world.

With no confirmation of whether this brilliant new shape will find itself on roads in the near future, hopes that this car could become the flagship sports model in the Toyota line up remain unfueled; for now at least.

One of the world’s favourite hot-saloons returned in Detroit, but for the first time it has been released as two cars, the BMW M3 and M4. In an effort to separate the four door-saloon M3 from the two-door variant, BMW has named the latter the M4, despite sharing almost all of the underpinnings with the more-door former.

The twin-turbo three-litre straight-six engine found in both cars may be 25 per cent smaller than the outgoing car’s V8, but it gains 10bhp to stretch 425bhp from the six cylinders, thrusting the lighter new cars to 62mph in just 4.1 seconds. Perhaps one of the most exciting features of the new cars is the confirmation that the specs list includes the option of an old-fashioned, manual six-speed gearbox, a dying breed in the super-saloon sector.

And with orders already flying in, these frowning M3 replacements are expected to arrive on UK roads in June.

Rivalling the aforementioned M4 is Lexus’ RC-F Concept. Both price and power suggest this car could be a serious contender for the German saloon, with the 450bhp V8 Lexus selling for around £57,000, just a few hundred more than its rival.

To give the Lexus Concept the handling to match, Lexus has used spot-welding and carbon fibre throughout the chassis’ construction. These ingredients could help the RC-F go head-to-head with the M4 through the corners too.

This concept version is expected to be followed by a production model later in the year, with sales starting towards 2014’s close.

Chevrolet’s most performance focused Corvette was unveiled in Detroit with a supercharged 625bhp V8. Sporting track-inspired additions such as added vents and cooling ducts, the racey looking supercar is expected to be a real track weapon.

With stickier Michelin Pilot Sport Cup 2 rubber and uprated brakes, the car certainly possesses all the right tools to challenge far pricier supercars on circuit, whilst the option of a removable roof and eight-speed paddle operated automatic gearbox are firsts for a Z06.

Whether the car will come to Europe remains unconfirmed, but with such potential to be a super quick on track racer, we can’t help but hope it lands on UK shores sometime soon.

Fans of massive rear-spoilers and burbling boxer engines will no doubt be happy to hear that the latest version of the Japanese marque’s legendary cars will be imported into the UK this May. Perhaps due to public pressure, the latest car looks far more similar to previous generations of the STI than the car’s latest concept model.

With its far more aggressive bodykit, large rear spoiler and purposeful 18inch wheels, the STI brings classic styling to what is a lighter, stiffer and larger car than predecessors. The 305bhp produced by the 2.5-litre flat four engine is now also controlled by torque vectoring, meaning traction will be greatly improved in all situations.

With prices starting from £28,995, the popular performance car looks set to land firmly back in the hearts of longstanding fans of the rally-legends.