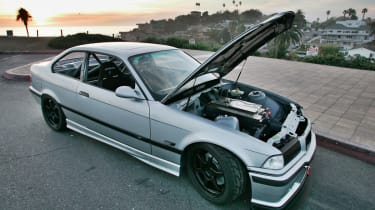 Modification has traditionally been a fairly simple process. A fueling tweak here, a new exhaust there, and if you're really serious a dive into the engine's internals. A full conversion to electric power probably wouldn't be your first port of call, but for the team at Californian conversion company EV West, it's the best route they've found.

‘There is nothing else like a flat torque curve,’ EV West founder Michael Bream states with authority. ‘It's intoxicating. Strong enough to overcome the melancholy from losing the sounds of an internal combustion engine.’

That's that, then. Petrolheads hold engine sounds in near-reverential regard. The noise of a screaming Ferrari V12 or ground-shaking 1960s muscle car V8 is almost primal in its appeal, but Bream believes the other sensations of electric cars are strong enough to overcome this most basic of automotive joys.

He should know. Over the last few years, San Marcos-based EV West has built cars to compete in some of motorsport's most iconic events, from a 400bhp, 850lb ft electric E36 BMW M3 to the SRD EV1, an all-electric buggy that took part in last year's Baja 1000. Bream names the latter as one of EV West's highlights so far, as the first company to ever enter an electric vehicle in the car-breaking event. ‘Opportunities like that are once in a lifetime,’ he says, ‘so those will always stand out.’

You'll note no mention of environmental friendliness so far, nor range anxiety. Those are almost incidental attributes of EV West's motorsport entries and vehicle conversions - response, performance and speed are much more important. ‘If we could make a car faster with dog farts, we would’ Bream remarks. He started the company after a successful streak in amateur racing, when he discovered a series known as the EV Cup. Sensing a challenge, Bream began building an electric BMW M3 - chosen for its sorted chassis, he says - but when the series folded before the first round even took place, Bream decided to compete against combustion powered cars instead.

The results speak for themselves - the M3's 2013 record is still the fastest production-modified electric car up the infamous Pikes Peak. Uniquely, at an event where cars race up to a 14,000-foot summit, the M3 produces its full power output all the way to the top. Thin air is for the weaker combustion vehicles, it seems. EV West intends to return in 2017, with an all-new car - based on a BMW 2002.

‘It goes back to our roots as car guys,’ says Bream of the new-old BMW. ‘When you fall in love with a car, they'll always hold a special place in your heart. We're not really changing the car, just making them faster and more balanced in exchange for losing the engine sound.’ The 2002, he says, is a logical step - a car the team already loves and has the means to make faster.

In fact, a love of cars is the only real criteria for conversions. EV West likes them unique, and likes to work on cars that are appreciating in value. That makes them worth buying, and helps cover the cost of (currently expensive) electric technology. EV West has worked on old Porsche 911s, VW Beetles, Mazda MX-5s, and Toyota MR2s. Old Volkswagens are popular - the simple layout of the air-cooled cars makes them ripe for conversion, and many parts transfer from model to model. One of EV West's most recent conversions is a bright yellow Mini Moke. It destroys the original car in terms of performance, and lights up the front tyres at will.

The cars will only get better, too. Bream says it's ‘refreshing’ to be involved in an industry that is in a constant state of pushing forward. He says it's like the computer industry of the 1990s, ‘but with a throttle pedal’. Eventually, he wants the business to become a source for components and an information resource for other conversion companies, but in the meantime it's all about making old cars a great deal faster. ‘We're an automotive performance company without prejudice,’ he says succinctly. ‘A future full of electric hot-rods is inevitable.’