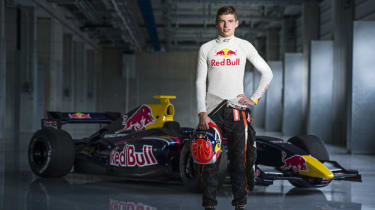 At 17 years of age, Max Verstappen will become F1's youngest ever driver when the red lights extinguish at the Australian Grand Prix in March 2015.

Verstappen's inclusion in Toro Rosso’s line-up through the Red Bull Junior program is representative of a sport seeking younger and younger talent. Where once Formula One stars were plucked from direct feeder series like GP2 and its Formula 3000 predecessor, it's now not unusual to see drivers jumping from even lower formulae such as Formula 3.

Several current drivers – including Sebastian Vettel, Jenson Button, Kimi Raikkonen and Kevin Magnussen – skipped Formula 3000 and GP2 entirely. Raikkonen made headlines in 2001, joining the Sauber team after just a couple of seasons in single-seater racing and a championship-winning season in the UK Formula Renault series.

At 21 years and four months Raikkonen was one of the youngest drivers ever to contest an F1 race, prompting concerns over his lack of experience. When Verstappen joins Toro Rosso, he will already partner a driver even younger than Kimi was on his debut - Kvyat is currently just 20 years old.

For teams, the incentive to seek out drivers early has also become more pressing. Vettel, Fernando Alonso and Lewis Hamilton all set records for youngest drivers' champion in their first winning seasons. Vettel was aged 23 years and 133 days when he lifted the trophy in 2010, and Hamilton became a title-winning justification of McLaren's young driver programme, which began supporting the British champion when he was 16.

Max, son of former Formula One driver Jos Verstappen, started equally early. He began karting aged seven, and made his first steps into single-seaters in 2013 after test driving Formula Renault and Formula 3 cars.

While his famous father might have opened a few doors, Verstappen has certainly driven through them of his own accord. After signing for Van Amersfoort Racing in the FIA European Formula 3 championship this year, the young Dutch racer has subsequently won nearly a third of the 27 races held to date, with eight victories. Just 77 points shy of series leader Esteban Ocon with two rounds and six races still to run, Verstappen has a chance of taking the title, academic as it may be.

Speaking on Scuderia Toro Rosso's official blog, Verstappen thanked his father, sponsors, manager and former karting and single-seater teams for their support. 'We've all worked tremendously hard to reach Formula 1' said Verstappen, 'and I will give my absolute best to be successful in the pinnacle of motorsport.

'With the return of the Verstappen name to Formula 1, I hope we can relive old memories and I'm hoping to see many fans at all the Grand Prix circuits.'

His father Jos never won a Formula 1 race in his 106 starts. But fresh-faced, in a team that has seen one of its former drivers become a multiple World Champion and following in the footsteps of some of the sport's youngest ever winners, Max Verstappen's 17 years and 164 days may prove little barrier to success in 2015.