Volkswagen has given the 2014 Polo some minor revisions, including a range of cleaner engines. Details live from the Geneva motor show here 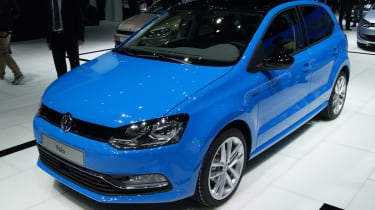 Volkswagen has revealed a refreshed look for the Polo, revealing the updated model at the 2014 Geneva motor show. As well as a mild exterior facelift, the Polo boasts a new range of cleaner engines, offering improved performance and economy.

The main improvements come under the bonnet, with a new full range of EU6 compliant engines. The diesel Bluemotion model has been replaced, this time with a new three-cylinder turbocharged petrol engined model. It’s the cleanest Polo ever, producing just 94g/km of CO2. An updated Polo GTI with more power is also on the way, however not until next year.

A new safety system, called ‘Automatic Post-Collision Braking System’, will be fitted as standard to all new Polos, automatically activating the car’s brakes following a collision, helping to minimise the chances of a secondary accident.

The new Polo will go on sale later in the year, with UK order books open in April. First deliveries are expected in July.