During a practice session at Road Atlanta, the Nissan DeltaWing racer collided with a Porsche 911, causing it to roll. 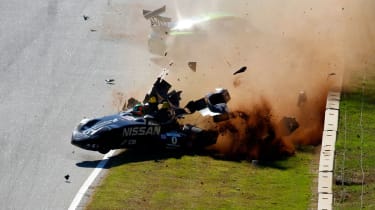 Nissan’s DeltaWing captured so may people’s attention during the Le Mans 24 Hours this year, but sadly, its time in the race was cut short, after being wiped out by a Toyota.

Now touring the US, the DetaWing is taking part in the Road Atlanta Petit Le Mans event. During testing, the DetaWing, piloted by Gunnar Jeannette, collided with a GTC Porsche – resulting in a dramatic rollover.

The driver was slightly dazed, as expected, but otherwise totally unharmed.