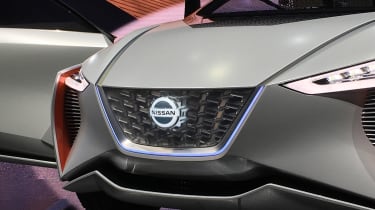 Nissan was one of the first global automakers to put a full battery-electric vehicle in the market, but it’s been slower than some to expand that expertise into other market segments.

This year’s Tokyo motor show suggests that’s all about to change, with the second-generation Nissan Leaf making its debut, alongside a Nismo-prepared variant and this – the IMx concept.

> Click here for our drive of the new Nissan Leaf

While not yet confirmed for production, the IMx concept hints at a future long-range fully-electric and fully-autonomous crossover – able to travel 373 miles on a full charge. 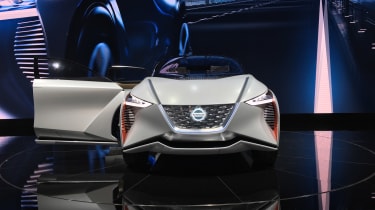 This range is backed up by what Nissan calls ProPilot, a fully-autonomous driving mode that can handle entire journeys unassisted. As part of these functions, the concept could drop its passengers off at a location of their choice, and head off on its own to park and recharge.

As is becoming more common with this type of vehicle (and particularly among concepts), it would also have the ability to deliver electricity back to the grid, if it wasn’t needed imminently by the driver. Such functions would also be available at the owner’s home, able to supply power to a house should the local grid fail for any reason.

It’s not all autonomy, however, as Nissan has endowed the IMx with an all-wheel drive system (using a motor on each axle) developing 320kW (429bhp) of power and 516lb ft of torque. No acceleration figures are revealed but we’d expect some fairly healthy numbers with power like that behind it.

The battery is set low in the structure to the benefit of a low centre of gravity, and the company claims the IMx is as much about driving pleasure as it is autonomy.

The exterior design is certainly sleeker than we’ve come to expect from most crossovers, though Jaguar’s I-Pace concept has also recently shown the benefits of an electric drivetrain when it comes to rendering a more dynamic profile. The usual concept cliches abound: large alloy wheels, an aggressive nose with slim headlights, and a coupe-like roofline, with dramatic slashes and scoops hinting at a shape carved as much by aerodynamics as by stylists.

The interior vibe too is unlikely to find its way into production anytime soon. Clap-hands doors allow access to the four individual seats, which seem to float above a floor that has the appearance of raked gravel in a Japanese garden. The unusual shape of the steering wheel belies that in autonomous mode, it recedes into the dashboard to give the occupants a little more space.

Neat touches abound, from the panoramic OLED panel at the front which can display the external environment in the background, to the 3D-printed frame of the “kumiki” (a Japanese interlocking wood puzzle) inspired head rests.

We’ll bring you more on the IMx concept, and Nissan’s other vehicles, from the Tokyo motor show floor.