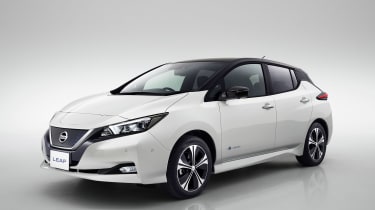 This is the all-new Nissan Leaf, the second generation of the Japanese brand’s ground breaking EV hatchback that brought electric motoring to the masses. Redesigned from the ground up, the original Leaf’s role of democratising the EV has been reformed to offer a more confident, excited and connected driving experience according to Nissan.

Nissan’s engineers focused heavily on improving electric range, with the standard Leaf now able to travel a claimed 235 miles on a single charge. This improvement is brought about by a larger lithium-ion battery pack, now at 40kWh, up from 30kWh in the old car. The Leaf’s front mounted power unit has also been upgraded, with peak power now at 148bhp, allowing the Leaf to hit 62mph in just under ten seconds.

This model will eventually be joined by a second, more powerful engine paired to a larger battery pack. This second model should raise the theoretical range to 310 miles, but Nissan say it won’t reach production for another year to 18 months. 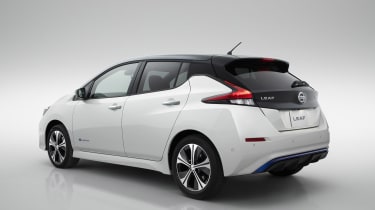 To further aid range and improve refinement, the Leaf’s body has a drag coefficient of just 0.27 all the while looking far more dynamic and modern.

Inside, the cabin has shifted away from the double-binnacle design of the previous Leaf, instead offering a less distinctive, yet higher quality look and feel. Gone are the bright digital graphics and beige plastics, replaced with a more sophisticated design.

Nissan has also extended the Leaf’s autonomous functionality, with traffic queue assistance now part of Nissan’s ProPilot autonomous driver technology. This autonomy is also due to grow according to Nissan, with an upgrade to stage-two autonomous driving capability in 2018. 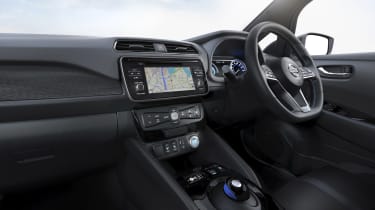 Due to reach UK showrooms next year, the new Leaf should mimic prices of the current car, although firm details have yet to be specified by Nissan.