BMW launches sportier i3s alongside updated i3 range at Frankfurt 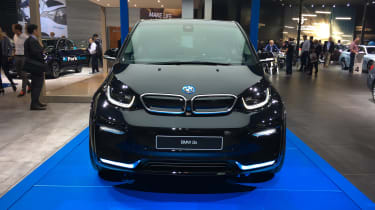 BMW’s i3 and i8 duo represent the eco-focused i sub-brand which has existed for four years to date. The i8 immediately quashed conceptions that hybrids should be sneered at in regards to performance, while the i3 has proved popular in urban areas around Europe. To keep the i model lineup fresh, BMW has gently updated the i3, intriguingly adding an i3s to the ranks.

Alongside updates to the brand's first all electric car BMW has decided to have a go at making a ‘sporty’ i3 called the i3s. To create the i3s, BMW has upgraded the standard car's 170bhp to 184bhp, with torque rising from 184 to 199lb ft. Electric range is also unaffected matching the normal car's 125 miles of real world range.

> Click here for our review of the current BMW i3

While those figures might not sound like much, the real appeal of the i3 and its electric engine was the fact those figures are available at zero rpm, making the i3 feel far perkier than you would think. Available in both pure EV and range extender form, the i3s could end up by being BMW’s best driving hatchback when the next 1 Series sells out and goes front-wheel drive. 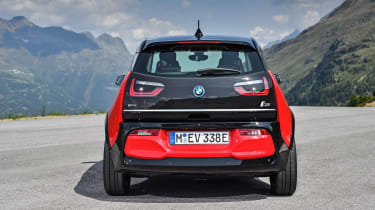 The result of these power upgrades is a 0-62mph time of 6.9sec (7.7 for the ReX range-extender model) and a top speed of 99mph. BMW also says it has worked on improving the driveability of the i3s, improving the traction control calibration and introducing a new DTC mode which will allow 'mild controllable drifts'. To sharpen up the driving experience, BMW has re-tuned the springs and dampers, increased the tracks by 20mm and included a new Sports mode on the driver control interface.

Visually the i3s is identifiable from the standard car by more aggressive bumpers, new 20mm-wider 20-inch wheels and some wheel-arch extensions to give the aesthetics an added bit of muscle. The wider track and tyres should also help improve front-end grip, something we found lacking from the standard i3’s skinny 155 section boots.

> Click here for our review of the BMW i8

We’ll have to wait until we get to have a go to see if these upgrades make the i3s any more fun to drive than the standard i3, but with the increased popularity of electric cars and the advancement in battery technology, this might be the first look at what we can expect from a hot hatch of the future. 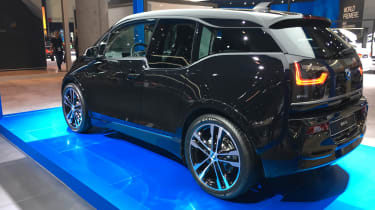 Unfortunately, for those hoping for any major improvements in range or performance in the standard car will likely be disappointed by the fact the normal i3 does without any major enhancements, with the same 33kWh battery pack and 125-mile range in the real world. Performance is also the same as in the previous car, hitting 62 mph in 7.3sec for the pure electric car, with the slightly heavier range extender model taking 8.1sec. Top speed is also the same, at a limited 93mph.

The bulk of the changes are made up of subtle styling upgrades, including new bumpers front and rear, and standard fitment of new all-LED headlights too. All cars also receive new LED lower indicators at the front (an odd omission from the previous car) and new colour options outside. 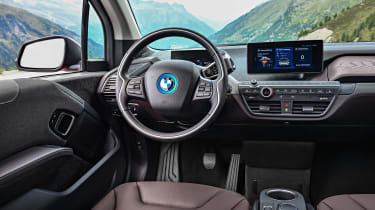 Inside, BMW is offering updated colour and trim options set out in the same themed interior choices as before, as well as upgrading to the latest iDrive system displayed on a now-standard 10.25-inch display. The i3 also gains improved active safety technology, including a new traffic queue function, which will drive the i3 at up to 37mph in traffic jams autonomously.

Starting at £34,070 for the entry i3 EV and rising to £40,125 for the i3s ReX it is not the cheapest way to get into electric motoring, but BMW is banking on their technology and calibration expertise to rationalise the high asking price. Seen for the first time at Frankfurt BMW dealerships are now taking orders for the new i3.