I've done a few stupid things in my time. Leaving my brand new pushbike parked under the wheels of a coal delivery lorry when I was seven. Trying to catch a cricket ball with my head when I was 12. Two party-size bottles of Strongbow at my first teenage party. Four endowment bloody mortgage buggering policies. But all of these things will soon seem like very good ideas indeed compared with what Andy Morgan and I are about to do. In a few hours' time we're going to attempt to drive more than one-and-a-half-t 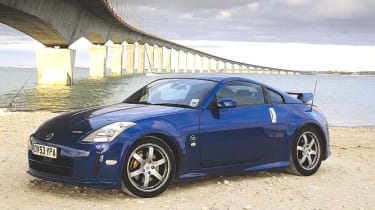 I've done a few stupid things in my time. Leaving my brand new pushbike parked under the wheels of a coal delivery lorry when I was seven. Trying to catch a cricket ball with my head when I was 12. Two party-size bottles of Strongbow at my first teenage party. Four endowment bloody mortgage buggering policies. But all of these things will soon seem like very good ideas indeed compared with what Andy Morgan and I are about to do. In a few hours' time we're going to attempt to drive more than one-and-a-half-thousand miles in a little over 24 hours. From Estoril, Portugal, to Cambridge, England, via Heathrow (which is where we left Andy's S4 last night). Yes, people have driven further in 24 hours, but most of them were racing at Le Mans at the time.

We've come to Estoril to watch the filming of a TV ad for Gran Turismo 4, the long-awaited PlayStation game. It should be in the shops by Christmas, and if you watch the ads closely you'll see a certain blue 350Z with a Nismo bodykit. Yep, our long-termer's going to be a TV star (any day now it'll start demanding special treatment, spending hours in make-up before it appears in group tests, mincing around and calling everyone darling).

In fact, I hardly recognise OV53 YPA when we arrive to watch the last day of the shoot, and not just because they've removed the number plates from the cars. Before it was shipped out, it went back to Nissan UK for a spruce-up. Not only is it cleaner than it's been since it rolled out of the Tochigi factory in Japan, it's also got a new chin spoiler (regular readers may recall the original was cracked by a deathwish pheasant on the A14) while a tiny crease in the nearside flank has been magically ironed away. In fact, it's so immaculate I have to check the odometer to be sure they haven't substituted a new car. A squad of valets keep the cars gleaming between takes, and when the Z rolls out of the pit garage into the brilliant mid-morning sunshine, I feel a welling of almost parental pride. Apart from the GT and the Pescarolo Le Mans racer, it's by some margin the most exciting car here.

To the film crew, though, the Z's just another prop. Most of them are way too cool to get excited about cars, though a few do let out a little squeak when the Pescarolo fires up with a skull-cracking bark. It's fascinating to watch the shoot comes together. There's a storyboard in one of the garages, from which I glean that the Ford GT is the 'hero car'. The twist in the ad is that when it comes into the pits, the driver hits a special switch and it explodes into pieces and reassembles as various different cars until he finds one he likes. Obviously they can't explode the real GT, so that bit will be simulated by CGI in the editing suite. Instead we watch a 'pit crew' run into position around a car that isn't there and pretend to put the wheels on. Twelve times.

At the epicentre of things is the director, a Korean American called Joseph Kahn, wearing fashionably saggy jeans and a T-shirt that says 'I Rock Catholic Girls'. He's directed a Hollywood movie, Torque, and loads of pop videos for people like U2 and Britney Spears and is generally reckoned to be a bit of a coup. The ad's costing about four hundred grand, and I'll bet a fair slice of that's going to Mr Kahn. When the last scene's in the can, the crew gives him a round of applause (I make a retching face at Andy, while secretly wondering how I can get the staff of evo to do the same when we finish the next mag).

We'd hoped to be away with the car by lunchtime. By mid-afternoon we're getting a bit bored, though proceedings are enlivened when, donut and coffee in hand, I inadvertently wander out of one of the pit garages and straight into shot, only to be shouted at by one of the best boys or assistant gaffers to 'GET BACK IN THE GARAGE'.

By late afternoon we've started fretting. Thing is, we've only allowed ourselves Thursday afternoon and Friday to drive all the way from Lisbon, up through Portugal, across Spain, the full length of France, through the Chunnel, back to Heathrow to collect Andy's Audi, then home to Cambridgeshire. When we finally get the car back it's quarter-to-eight on Thursday evening. Chances of getting on the Chunnel by midnight on Friday as planned look slimmer than a snake that's holding its tummy in. We decide to put in a couple of hours' driving tonight, find a hotel, get some kip and make an early start.

Well, that's the plan. And the first part goes well. With about 150 miles under the Nissan's Michelins, we dive off the E80, head for the town of Viseu and find a promising looking hotel. It's 10pm but they have rooms. What they omit to tell us is that the local youth spend all night drinking, noisily, and we're kept awake by what sounds like a small riot going on outside. When we emerge bleary-eyed at 6am, people are falling over in the street. Mercifully, the Nissan's unscathed and fires up with its usual hearty bellow. Now all we have to do is drive. And drive. And drive. The first hundred or so miles of Portugal pass quickly. The hills are shrouded in mist and the dawn light is enchanting. But by eight the roads are busy and it's frustratingly slow progress till we hit the dual carriageway towards Salamanca. The roads are pretty good - not the potholed nightmares of legend, though the occasional broken surface tests the 350Z's usually tightly controlled damping.

In fact, the Nissan's proving immensely capable at this sort of long-distance running. The ride strikes an excellent balance between tautness and absorption; the seats are supportive but not bum-numbingly firm; the long-striding sixth gear knocks the revs back to less than 4000 at a three-figure cruise. The steering, which feels gratuitously heavy at low speed, just feels meaty and direct when you're pressing on. Even savagely bucking tarmac doesn't throw it, and it feels nicely stable under braking.

As we hit the far north-eastern corner of Spain the road climbs into some spectacular scenery, plunging into short tunnels, clinging to mountainsides, the opposing carriageway way down below. In places it loops and swoops in extravagant arcs and I can't resist pushing the 350Z harder and faster. We're wide awake now and loving every minute. Over the border into France and, as we hit the first autoroute, spirits are high. It's about 2pm. We've already been on the road for eight hours and we've covered around 550 miles. Just another 850 to go...

It's the autoroutes that save the day, allowing us to tuck away big chunks of kilometres in good time. The 350Z has a decent range; we can go about three hours or three hundred miles between fill-ups, fuel consumption hovering in the mid-20s, as it always has. At each petrol stop we pick up more sandwiches and biscuits and bottles of water - and curse the 350Z's lack of stowage bins.

Bordeaux, rush-hour, and we're stuck for an agonising 45 minutes, inching around the ring road. We aim for La Rochelle in search of proper sustenance and cross the bridge to the Ile de Ré but at 6.30pm we're too early for the restaurants. At the next petrol stop near Nantes we tuck into steak and chips instead.

A rapid blast up through the gears is like a shot of adrenalin; we never tire of leaving the windows down at toll booths and hearing the 350Z's big V6 gargling into the night. It's not a great gearbox to be honest, just a bit too heavy and ponderous, and the clutch is quite sharp, occasionally sending a jolt through the transmission. The tingly gearknob is now starting to zizz more noticeably in fifth too, though somehow it just adds to the Nissan's character. It seems daft to talk of a modern Japanese car having a soul, but this one really does. It's got a big heart too, and it feels like it would keep going forever.

A bit like this journey. Tiredness comes in waves as we tick off the main towns en route - Rennes, Caen, Rouen. And then, when we think we're on the final sprint to Calais, the sinking feeling when the sign reads Calais 292km.

It's now around 11pm and there's virtually no traffic on the autoroute; time to take a calculated risk and give it some welly. We up the cruising speed from 100 to 120, and just occasionally, when the road opens out well into the distance, considerably more. The Z accelerates with genuine vigour from 110 to 140, then the rate of velocity-gain starts to slow; above 150 the last few mph are given up reluctantly.

We arrive at the tunnel terminal at 1am, board the train at 1.30. It's after 3am when we reach Heathrow and Andy piles his camera gear into the waiting, dew-covered Audi. Just the M25 and the M11 to go, and tellingly it's when I'm jogging along at about 85 that I start to feel really tired. But even when I arive home just before 5am there's no aches, no numbness, just a wave of relief. I glance at the trip meter - 1412 miles since we set off. I remember Andy's words from somewhere in the middle of France: 'This is more miles than most people clock up in a month.' Thank you, and good morning.