Nissan pulls the wraps off a revised 370Z coupe at the 2012 Chicago motor show. News, video and pictures here 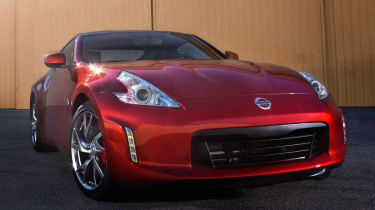 11
The first official pictures of Nissan’s updated 370Z have been released. Showcased in Magma Red - one of two brand new metallic colours - the subtle facelift gives the Zed a new front end, daylight running LED lights and new 18in alloy wheels. An optional sport package brings with it red brake calipers, ‘euro-tuned’ shock absorbers and 19in alloys. The update debuts at this week’s 2012 Chicago motor show, three years after the 370Z was first released. Its 3.7-litre V6 engine is unchanged from the current model, developing 326bhp and 269lb ft, enough to launch the car to 60mph in 5.4sec and onto a 155mph top speed.  The new model (dubbed the 2013 model year) will be available in Coupe or Roadster forms, sales beginning for US buyers in June 2012. The facelift won’t reach Europe, though with the Zed around halfway through its expected lifespan, we can expect an update of some description later in the year. The US-only Nismo-tuned 370Z (which boasts 345bhp thanks to an ECU tweak and sports exhaust) doesn’t yet receive the facelift but does get a new Bose stereo and high performance brake system.
Follow us on TwitterFollow us on FacebookEmail us