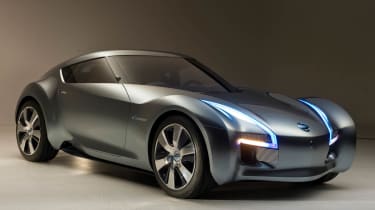 A Nissan badged rival to the Toyota GT 86 and Subaru BRZ looks increasingly likely. A more compact sports coupe has been strongly rumoured since the Nissan Esflow concept of early 2011, and while that used an electric drivetrain, a small capacity petrol variant could sit below the rear-drive 370Z range (or even replace it).  The 187bhp 1.6-litre direct injection turbo from the top-spec Nissan Juke, of which a similar version powers the next Renaultsport Clio (Nissan and Renault have a strong tie-up), would seem ripe for tackling the 197bhp Toyobarus. It can also be twinned with an automatic gearbox, an option on both the GT 86 and BRZ. ‘I much prefer smaller sports car,’ Nissan chief creative officer Shiro Nakamura told the Sydney Morning Herald. ‘It is the time to look at that. With 370Z, we still don't know next generation will have a larger or smaller engine.’ While a fairly ambiguous quote, it provides a clear hint that Nissan could downsize its next sports car. It would create a tantalising class battle between Nissan, Toyota, Subaru and the next-generation Mazda MX-5, which is set to use small capacity turbo engines. We look forward to seeing if it happens.