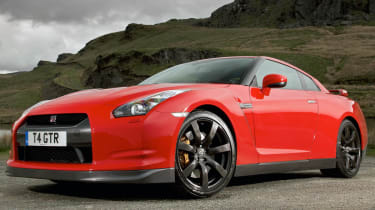 Nissan’s GT-R has had a bit of a refresh. The changes match those applied to the Japanese market GT-R last month, but have now been made available for European cars.

The biggest news regards the suspension, with the front spring and damper rates tweaked to improve ride and handling, with better handling also promised thanks to the improved responsiveness. To help out the latter the rear suspension is also stiffer.

The gearbox logic has been changed, with more aggressive downshifts adopted when in automatic mode, while there are additional cooling ducts on the carbonfibre rear diffuser to aid airflow to the exhaust and transmission.

There’s a more rearward bias for the EBD (electronic brakeforce distribution) while there’s also increased cooling for the rear brakes, and emissions tweaks ensure a 3g drop in CO2, down to 295g/km.

Inside the car there’s a few changes, too, namely a more trick nav and audio system with a huge hard drive for storing music and a super sharp screen.

So, nothing earth shattering. But then the rather good Nissan GT-R – our 2008 Car of the Year, no less – hardly needed much in the way of improvements. The changes will be present on all GT-Rs ordered from now, with no price hike planned, meaning things still kick off at £58,100.

You can see the Nissan GT-R take on our 2009 Car of the Year in our bumper Issue 138, on sale from Weds November 11. Question is, which car is the GT-R trying to beat?