Nissan's GT-R stock output is pretty respectable, but a ECU remap releases even more oomph for a reasonable outlay 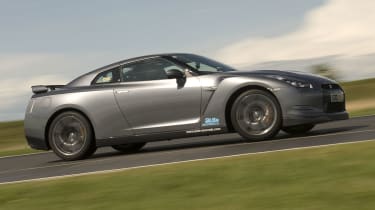 Two questions relating to the GT-R had been playing on my mind. One, what is the true power output of a standard UK-spec R35? (Is it really the puny 478bhp that Nissan claims?) And two, how the hell do I explain to The Brunette that, whatever it is, it’s simply not enough?

I never did manage to come up with a solution for the latter, but to provide a definitive answer for the former I recently paid a visit to my local dyno, Surrey Rolling Road in Chobham (www.surreyrollingroad.co.uk).

Now, I know that the Milltek Y-pipe I had fitted to my car last month is only supposed to enhance the GT-R’s sound and not its power (and thus not trouble the Nissan warranty), but as there was the possibility that it could, in reality, affect the figures, I also invited a fellow GT-R owner to attend and get his completely standard car figured too.

After SRR’s Charlie Wright had worked out a way to safely strap down a GT-R on his Dyno Dynamics rolling road without having to remove any of the car’s underbody aero panels, I switched off GO02 LLA’s ESP to stop it interfering, and Charlie executed a power run in third gear. After being mildly disappointed with the figures the tuned Corvette Z06 I used to run obtained on this dyno, I was rather surprised to see that my GT-R produced a very healthy 512bhp. Even more staggering was the peak torque figure of 500lb ft. That’s a very big jump from the claimed 433.

We then tested the other, completely stock GT-R and found it produced a solid 506bhp with 485lb ft, but before any conclusions are jumped to about the Y-pipe, I should point out that this car had only covered 1500 miles, so probably had a considerably tighter mill than Godzilla 2. Whatever, the inescapable conclusion is that GT‑Rs comfortably exceed the stated outputs, which goes some way to explaining the car’s remarkable performance – 0-60mph in 3.9sec and 0-100 in 8.4 for the UK press car (evo 134).

It was numbers like these that meant I had no plans to tune my GT-R. After all, most sane people would agree that these are already fantastically impressive figures. However, crossing America in a mighty 820bhp SSP-tuned GT-R (evo 133) opened my eyes to just how tough the new VR38 engine is, so when Ben Linney from UK-based tuner and parts supplier GTC (www.gtc-r.com) mentioned that maps specific to the European GT-R were now available for the amazing Cobb AccessPort tuning device, I was seduced by the power of the dark side…

A small, iPod-sized unit, the AccessPort simply plugs into the diagnostics port under the steering column and allows new maps to be downloaded to the GT-R’s ECU (it can also act as a data logger and performance meter). Does it work? Well, having tested my car on the rolling road in standard tune, a quick ten-minute download had it running the Stage 1 97 RON map (for super-unleaded petrol only), so Charlie fired up the cooling fans again and went for another power run.

I was astonished to see the new graph showed a peak of 547bhp, with a stonking 530lb ft of torque. A quick run with my Racelogic PerformanceBox later on showed a dramatic improvement in performance too, with a best 0-60mph time of 3.2sec and 0-100 in 7.6. When I remember how much money I spent tuning Godzilla 1, my old R33 GT-R, the fact that the Cobb can achieve this and only costs £750 (plus VAT) is mind-blowing.

Now to try Stage 2 and maybe even a custom map…