Hardcore SpecV version of Nissan GT-R gets UK and European sales, at a supercar price 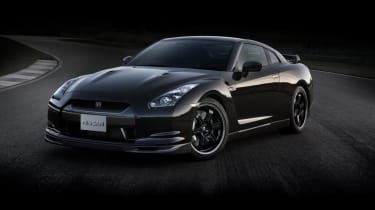 Nissan’s hardcore GT-R – the SpecV – is getting official UK sales. It’s been available in Japan for a short while, and European sales were never 100 per cent, but happily it’s on its way over here next spring. Unhappily, it’ll cost you rather a lot more than the standard car: £124,900 compared to, err, £58,100. Quite a hike. That’s despite it containing the same 3.8-litre V6 with an identical 478bhp. So where does your extra £66,800 go? The brakes, mostly. There’s a set of carbon-ceramic stoppers, developed jointly by Nissan and Brembo, said to take up nearly £40K of the additional outlay. The suspension gets revised springs and new fixed-rate dampers, while engine performance is enhanced (despite no extra power) by a new high gear boost control device, which cranks up the boost of the twin turbos for greater acceleration. It results in a claimed 3.4sec 0-60mph time, the same ballpark as a considerably lighter Ariel Atom or Pagani Zonda. The SpecV does go someway towards lightening the 1.7-ton GT-R, though, with 60kg shed via copious use of carbonfibre (the rear spoiler, grille and brake ducts all benefit) while there’s a set of new forged alloy wheels – courtesy of NISMO – that also lighten things up a tad. The back seats have been taken out and the fronts replaced with bespoke carbonfibre Recaro buckets, too. Just 40 cars will make it to Europe, to celebrate 40 years since the launch of the first GT-R-badged Nissan, apparently. Just two UK dealers will sell the SpecV – Middlehurst Motorsport GT-R in Merseyside and West Way GT-R in Oxford – with order books open now. And if the price scares you a little bit, then fear not, you can get the car in Ultimate Black Opal (i.e. purpley black) chromaflair paint to show just how special and expensive your GT-R is. Excellent.