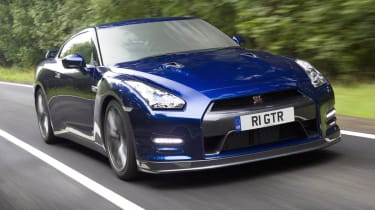 Nissan has officially revealed its 2011 model year GT-R. The main enhancements are in the engine bay, with the 3.8-litre twin-turbo V6 now putting out 523bhp at 6400rpm and 451lb ft at 3200rpm.  Fuel economy has also been improved through a reduced drag co-efficient (0.27 to 0.26), modification of the boost pressure and a tweaked exhaust system. No official figures have been released, though, so the gain over the current 22.8mpg may be negligible.  There are also larger front brake discs (now 390mm), a new Dunlop Sport Maxx tyre and lighter Rays forged alloys in ‘Hyper Blue Black Chrome’. These changes, combined with bodywork alterations such as a new front bumper and rectifier fins (which improve downforce by 10 per cent),  have contributed to a Nordschleife lap time of 7min20sec, or six seconds quicker than the existing GT-R.  The alterations are less comprehensive inside, with the main additions being the use of magnesium for the DSG paddle shifters and some dashings of chrome. Changes to the exterior cosmetics include the introduction of two new colours, Daytona Blue and Metallic Black.            The GT-R is currently only offered in one trim level and is now available in Nissan High Performance Centres priced at £69,950, a rise of £10,005 over the outgoing model.