Nissan reckons that the new GT-R has the measure of Porsche’s 911. We put its claims to the test 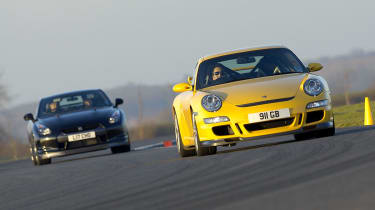 Having witnessed the GT-R withstand a full-blown assault from the bombastic Z06 at Santa Pod, then experienced it effortlessly humbling the Audi R8 on the challenging roads of Wales, I’m more than a little fearful of what the Bedford Autodrome (and the seemingly omnipotent GT-R) has in store for Porsche’s 997 GT3.

Poor weather would unquestionably have sealed the 911’s fate before the test could start, so it’s great to see the West Circuit is bathed in brilliant sunshine as we convene in the pit lane. I’ve driven the GT3 here from home and the journey has done an awful lot to restore my confidence in the abilities of Stuttgart’s finest, at least for the specific job of lapping a circuit.

Though the trip was short, it has served as the perfect refresher, reminding me just how small and sharp the GT3 feels; angry too, thanks to the 3.6-litre flat-six’s jagged rasp and razor-keen response. In short, while the Nissan has twin-turbo brawn and almost ruthless body control, the GT3 has a lightness and sinewy athleticism that should be better suited to the heavy braking and high-speed direction changes that characterise our preferred test track.

We decide it should be the 911 that throws down the gauntlet. With the VBOX suckered to the inside of the windscreen and Bovingdon strapped into the passenger seat, we nose out of the pit lane and begin the warm-up lap. The 911’s honour rests in my sweaty hands.

Experience tells me that although the ambient temperature is chilly, the GT3’s Michelin Pilot Cup tyres will give their best on our first and second flying laps, with oversteer becoming more of an issue with every subsequent lap. No time to worry about that now, though, for we’re soon turning into Tower to begin our first timed lap, the GT3 settling into a beautifully balanced slide, the small amount of oversteer neutralising the nose’s desire to push wide yet doing nothing to harm our forward momentum. It’s a great start.

Braking into the Hangar Hairpin from around 100mph is always fraught, as the line between time-wasting timidity and gung-ho optimism is separated by just a few metres. Surprisingly, the GT3’s (optional) carbon-ceramic brakes don’t deliver an instant slam of stopping power, but bite with increasing power all the way to the turn-in point. Getting the nose to key-in is always tricky here, for the camber falls away slightly to the exit. It encourages the 911’s nose to push wide and requires a fractional lift of the throttle to settle, but there’s soon enough grip to unleash the full fury of second gear, then snap up into third and wring out all the revs on the approach to the Club Chicane.

It’s tempting to really attack the braking zone here, but it’s an awkward section that requires you to brake while on a diagonal right-to-left trajectory, then make a quick direction change to the right as you enter the crucial Palmer Curves. Getting the GT3 hooked cleanly into the long left-hander is tricky, but apart from a few twitches from the tail, the 911 remains stable and we get a brilliant run into the scary-quick right transition.

The GT3 takes some holding and is oversteering for the last half of this 100mph corner, but the Pilot Cups are at their optimum, which means the slide can be balanced with corrective lock rather than a time-wasting and almost certainly destabilising lift of the loud pedal. The brakes feel very good piling into Pif-Paf, and despite the heavy braking and super-quick direction change, the tail-biased Porsche remains stable. Similarly the entry to Bank is a test of the tail’s resolve, and while you can feel the weight begin to work the rear tyres and suspension hard, it resists falling into oversteer. Once turned-in, the 911’s rear-slung engine works to our advantage, generating tremendous drive as the rear tyres are pushed hard into the tarmac.

The Beckham Esses are the most straightforward elements of the lap, but you’re always conscious of needing a clean exit to set you up for the charge towards the daunting O’Rouge. The entry is faster and earlier than you think and it’s also extremely hard to get most cars settled on the way in. Miss your turn-in point by a fraction and you’re punished with a disproportionate amount of understeer, yet get the front turned-in too aggressively and you’ll be fighting oversteer all the way through the corner.

Yet again the GT3 feels magnificently poised, happily adopting an electrifying stance that requires little more than a quarter turn of opposite lock and a sensitive right foot. The all-important run through Tower requires the same sympathy for the 911’s unique weight distribution and a preparedness to work just beyond the limits of the tyres.

As we cross the line it feels like a good lap. Actually I don’t think I’ve ever driven a better – or more satisfying – lap of the West Circuit, which perhaps accounts for why my tongue is now stuck to the roof of my mouth. The VBOX puts it in less emotive terms: the GT-R has a time of 1:22.6 to beat.

Can a front-engined, four-wheel-drive car that weighs almost 350kg more and has been created to satisfy a less than track-focused brief really threaten the GT3? Climb out of the low-slung, race-raw Porsche and into the bulkier, comfier Nissan and it seems unlikely. The engine is responsive and vocal but can’t match the naturally aspirated flat-six’s zing. Yet what it lacks in bark it immediately makes up for in fearsome bite. Slot the chunky gear selector into D, then nudge it to the right to select M for manual gearshifts, and squeeze the throttle. With a minimum of fuss it slugs you hard from a little over 2000rpm, a massive surge of low-down torque building into an avalanche of mid-range, force-fed grunt. It has top-end too, pulling strongly to 7000rpm with no sense of abating. That twin-turbo V6 is an absolute powerhouse.

It’s an extraordinary sensation, made all the more surreal by the near-seamless and instantaneous nature of the upshifts. No matter how well you can stir a stick, the GT-R will steal time with every pull of the right-hand paddle. The brakes – a source of mild concern when I drove the GT-R Proto at the Nürburgring last summer – have tremendous initial bite but don’t quite manage to sustain that sense of absolute authority through the meat of the braking zone. That said, they’re much better than they were, and are proving just as effective as the GT3’s despite the GT-R’s significant extra weight and the discs being cast iron rather than carbon-ceramic.

If the engine and transmission are breathtaking and the brakes mighty impressive, it says a great deal about the GT-R’s chassis that it’s actually the handling that leaves the most lasting impression. Yes, there’s more stubborn – and less exciting – understeer through the long, fast corners where the GT3 is making you sweat with high-speed oversteer, but every time you make a critical correction in the Porsche the Nissan coolly steals a few more tenths of a second. The balance is neutral to nose-led, which sounds boring but isn’t, if only because you soon become addicted to the Nissan’s miraculous control and blinding pace. To drive it flat-out on a circuit – even one as wide and safe as Bedford – is to understand precisely how it can be so fast around the Nordschleife.

Sure, you don’t feel challenged by the GT-R as you do by the GT3 – that gut-tightening on-limit sensation of walking a tightrope is missing – but the speed trace through Palmer, O’Rouge and Tower reveals the cost of such visceral thrills. The Nissan GT-R posts a crushing lap of 1:21.7. And all seemingly without breaking sweat. To save you the job of checking our lap-time table in The Knowledge, the GT-R slots in just beneath the Ferrari Enzo…

Nissan has built a winner, a new performance icon. And if that wasn't enough, there are rumours of a V-spec version – a lighter, 'Club Sport'-style model with a half-cage and possibly as much as 550bhp...