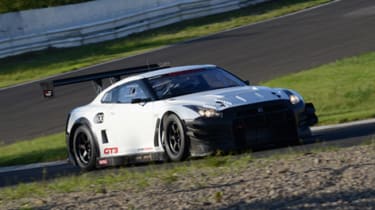 Nissan has opened the order books for its updated for 2013 GT-R GT3 racing car. Nismo, Nissan’s motorsport arm, has been through the GT-R in detail.  Changes have been made to the engine, aerodynamics, brakes, suspension and gearbox. The 3.8-litre, twin-turbo V6 engine has been reinforced for extra reliability, and has gained new camshaft timing.  The result is that power is up to 543bhp, whilst torque increases to 470lb ft. Power goes through a paddle-shift operated six-speed sequential gearbox to the rear wheels only, GT3 rules not allowing the four-wheel-drive championed by road-going GT-Rs.  New gear ratios have been installed to make the best use of the retuned engine. The aerodynamics have been massaged, too. New canards have been added to the front while the rear wing has been repositioned in an effort to improve the car’s balance and downforce. The brakes and suspension have been recalibrated to match. The 2012 version of the GT-R GT3 has proved successful across the globe. Jann Mardenborough – evo's 2012 Emerging Talent of the Year – took his to a final placing of sixth overall in the British GT Championship. The new car is priced at £270,000 before tax. Nismo is developing an upgrade package for 2012-model cars, but has yet to announce a price.