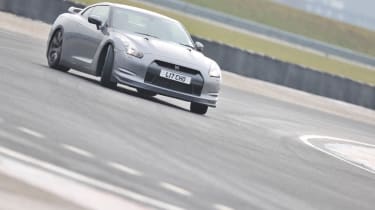 Tuning firm Litchfield Imports is currently preparing a modification package for the Nissan GT-R that will give the Japanese sports car 1000bhp.

Named the GT-R LM1000, the £50,000 package is Litchfield’s most extensive yet to the machine, including the fitting of its own self-prepared 3.8-litre V6 engine, which has been 18 months in development.

‘This engine, that we developed with our own rods and pistons, ended up at 900bhp,’ company chief Iain Litchfield told evo. ‘We’ve done lots of mileage in it and it proved reliable, so we’re moving onto the ‘Red Top‘ engine, which features everything we know about the GT-R engine and we use the very top suppliers. It has bigger pistons, stronger rods, different crankshaft and Formula 1 finishing techniques. We’ve got our own turbo kit, and a fully-upgraded gearbox, bigger brakes and a Bilstein suspension kit.

‘When this display car is run in, it should be over 1000bhp, but I want it to drive completely like standard, which it did at 900bhp no problem, even around town.‘

The upgrades are available in separate modules, with Litchfield claiming that £14,000 of upgrades would be enough to make the GT-R quicker than a Veyron, clocking a 0-100mph time of 5.65sec in that 750bhp set-up. Litchfield has already taken orders from customers asking for more than 800bhp, with the first 1000bhp cars expected to be available from this summer.

Our review of a tamer Litchfield Nissan GT-R is here