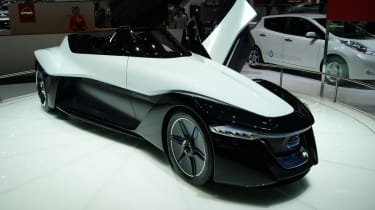 Nissan gave Europe is first taste of the BladeGlider concept at the 2014 Geneva motor show, with the wing-swept shaped sports-car based on the ZEOD RC Le Mans racer taking the crown as one of the most unconventional vehicles on show.

Featuring a McLaren F1-style three-seater arrangement, the car – originally debuted in Tokyo last year – uses electric technology from the LEAF to produce zero emissions from its two in-board motors. With heavy components such as the lithium-ion batteries sitting over the rear wheels, the resulting 30:70 front-rear weight distribution gives the BladeGlider a massive advantage over conventional cars when maximising traction off the line.

Handling is also said to be vastly improved compared with conventional layouts due to the one-metre wide front’s lightness, enabling the far narrower front-tyres to work without hindrance from significant body roll or weight-transfer. This results in reduced understeer, improved steering-feel and even added precision. Combined with torque vectoring, where each motor – which sits in-board of each wheel – can be independently controlled to maximise traction and grip, tighter turn-angles can be achieved.

Braking also sees advantages from the wing-swept layout. The rears provide most of the stopping power, with the fronts focusing on turning the car. This results in a reduced tendency for the fronts to lock, enabling harder braking and sharper turning to take place simultaneously.

Perhaps one of the most exciting features of the car, however, is the resulting seating position. As the driver, you sit ahead of your (up to) two-passengers, who sit behind to your left and right. This presents drivers with a far wider plain of view, designers of the BladeGlider working hard to maximise this with narrow a-pillars and lengthy windows. This seating position is said to also even-out tyre wear, with both sides carrying equal weight thanks to the driver’s central position.

It might not be the prettiest sports concept to come out of Geneva, but it’s certainly one of the most purposeful. As demonstrated by the DeltaWing Le Mans racing car – the car that first put the ideas behind the BladeGlider into practice – this shape works. Issues with reliability and inconsistency have masked any results of significance, but this can be expected with any new car; especially one this innovative.

Even so, DeltaWing and ZEOD RC designer, Ben Bowlby, maintains that the design philosophy holds many advantages for handling and performance. He said ‘I'm sure the BladeGlider will meet with the same initial scepticism, but we know, after extensive testing on the racetrack with race drivers behind the wheel, the Nissan BladeGlider has the potential to be the best handling production car in the world.’

It’s true that the DeltaWing’s ability to cut it with the world’s best ‘conventional’ prototypes certainly confirms potential for the BladeGlider, so hearing that it could land in showrooms within the next five years is exciting news. It’ll certainly find itself in evo when we can get our hands on one, that’s for sure.