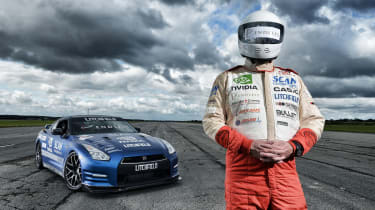 The blind land speed record has been broken in a highly modified Nissan GT-R.

Mike Newman is a multiple blind speed record holder, but beat his 186mph best from 2013 by a considerable margin, clocking an average of 200.9mph in opposite directions at Yorkshire’s Elvington airfield.

Newman achieved the speed while driving solo, receiving guiding tips (including ones about the conditions, which included high winds and rain) via radio from his stepfather in a similarly powered GT-R chase car.

Topping 200mph required a car that could comfortable reach the double-ton and decelerate back to a halt in the length of a British runway. Newman’s team have worked with Porsche, Noble and BMW in the past, but this time consulted Nissan tuner Litchfield, who built two GT-Rs for the job.

The end result was a pair of cars with 1200bhp apiece – way beyond the 542bhp the GT-R’s twin-turbo V6 engine produces as standard. As well as ensuring the big Nissan could top 200mph (the standard car’s top speed is 196mph), the tuning was required to ensure Mike could accelerate proficiently quickly, with 150mph required by the runway’s halfway marker. Once 200mph had been breached, a £20,000 set of carbon-ceramic brakes then facilitated a nice assertive stop. Other tweaks included lightweight carbon panels and a roll cage.

Newman was full of praise for the cars provided. ‘It’s safe to say that we simply could not have done this without them,’ he said. ‘These two Litchfield-built GT-Rs are the only cars able to give us the speed, acceleration, stability and reliability that we needed for this record. The cars are just astonishing and the team have been a joy to work alongside. Time for a drink together to celebrate I think!’

Newman works with the Speed of Sight charity, which aims to enable those with sight problems to get involved with cars and motorsport. This record strikes us as a pretty good way to raise its profile.