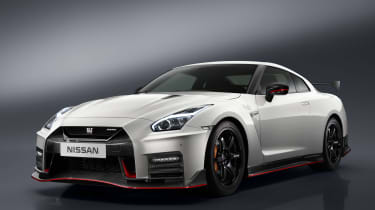 While visual differences are hard to spot at a glance, Nissan and Nismo engineers have been over the car with a fine-toothed comb making subtle improvements throughout.

One aspect that hasn’t changed – and arguably didn’t need to – is the GT-R Nismo’s 3.8-litre, twin-turbocharged V6, with the internal code VR38DETT.

It still develops 592bhp (at 6880rpm) and 481lb ft of torque from 3600-5600rpm, courtesy of a pair of larger turbochargers (snagged from the GT3 car) than the standard car. The six-speed dual-clutch transmission also remains unchanged, so we’d expect very similar acceleration and top speed figures to the outgoing Nismo: a quoted 2.6sec to 62mph and a 196mph autobahn maximum.

There should be some changes to the way the car corners however, as rigidity improvements to the standard GT-R have allowed Nissan to tweak the Nismo’s dampers, springs and anti-roll bars. Nissan claims the new GT-R Nismo is 2 per cent quicker in its in-house slalom and cornering tests.

Those characteristics are further enhanced by refinements to the GT-R’s shape, resulting in greater downforce.

As per the regular car, the Nismo’s restyled bonnet is stiffer than before and deforms less under aerodynamic pressure, for more consistent aero characteristics. The carbonfibre bumpers are also stiffer than those of the regular GT-R, while Nissan has affixed canards to the front to direct aiflow around the car and generate extra downforce. Rounding off the exterior changes is the Nissan ‘V-motion’ grille design, which is larger than before to improve cooling.

There are improvements inside too, with the same interior design refreshments as those applied to the refreshed GT-R. They result in a higher-quality feel than previous GT-Rs, while items like an Alcantara-trimmed dash, carbonfibre centre console and red Alcantara inserts to the Recaro carbon-backed seats mark the Nismo out from its siblings.

Other changes to the Nismo GT-R match those of its regular counterpart: shift paddles mounted to the steering wheel rather than the column, refinement improvements (also related to the body’s extra stiffness) and smoother shifts for the six-speed DCT.

‘With the 2017 GT-R as a starting point, the new NISMO version has become a more well-balanced machine, with not just increased performance, but a heightened premium feel overall’ said Hiroshi Tamura, Nissan’s chief product specialist for the GT-R.

Pricing for the new car has now also been confirmed, with the new Nismo costing no less than £149,995 and going on sale from November 1st.