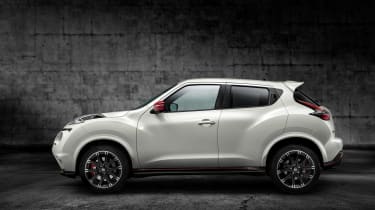 Hot hatchback or sporty crossover? The Nissan Juke Nismo isn't an easy car to pigeonhole but its curious appeal hasn't diminished with the launch of an updated RS model.

Launched at the Paris motor show earlier in 2014, the Nismo RS is now on sale in the UK. Prices start at £21,995 for the two-wheel drive car with a manual gearbox.

Nismo's engineers have boosted power and tweaked the suspension, helping to turn the high-riding Juke into a more focused hot hatch.

That could have spelled disaster for the Juke's handling, already rendered moderately unruly thanks to its tall stance. To counter further wheel-scrabbling, Nismo has equipped two-wheel drive, six-speed manual RS models with a limited-slip differential.

Nismo has addressed one of the Nismo's previous shortcomings, its dull exhaust note, with a retuned system and larger-diameter silencer. Brakes have grown too, with 320mm discs up front (previously 296mm) and ventilated discs at the rear. Revised spring and damper settings should ensure a sharper drive.

A red pinstripe runs around the bottom of the car, colouring echoed on the door mirror caps, brake calipers, RS badging and inside, a red tachometer. 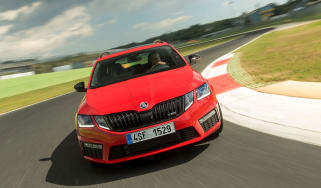