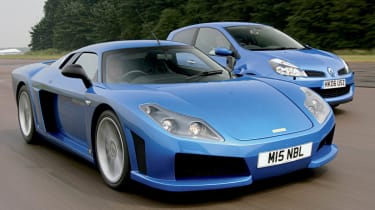 Lee Noble has announced plans of his new supercar. He’s the man behind Noble Automotive, and responsible for one of our favourite drivers’ cars, the Noble M12 GTO.

He left the company before development of the Noble M600 supercar (a star of our Car of the Year feature) got into full swing, but a comeback had been on the cards, and it sounds like quite a reappearance.

Lee is heading an all-new company, Fenix Automotive, with ‘one of the most dramatic supercars of the century’ promised for launch next year.

And how will it be so prolific? Lee promises a light, ultra-powerful mid-engined supercar, utilising a V8 to deliver a sub-7sec sprint to 100mph, a figure in a different ball park to the Noble M12 and more than able to rival the rather brisk new M600.

Lee says we’ll get all that for less than £75,000, though, little over the third of the cost of Noble Automotive’s current offering. ‘Our new car will offer buyers performance and dynamics that they’d normally have to spend well over £100,000 to experience, but at a far more affordable price,’ he says. ‘It will combine simplicity, strength and agility, while its two-seat, closed body will ensure sensible levels of refinement for road use.’

More intriguingly, though, Lee speaks of it being more usable still: ‘thanks to a feature which will be revealed nearer the car’s launch, it will be amazingly practical too, for both track and road users.’ No clues as to what that is, but consider us teased…

The first prototype Fenix, which will test the brand’s all-new chassis and powertrain, is being put together at Port Elizabeth in South Africa were the M12 was produced. Development has been going at full pelt since 2008, and the car should hit the market by the end of next year, apparently.

Expect more news and first pictures of the Fenix (with styling set to cause a stir, we hear) early in 2010. Keep your eyes on evo.co.uk, as we’ll keep you updated on the latest from Fenix Automotive and Lee Noble.