Victory for Buemi in Monaco 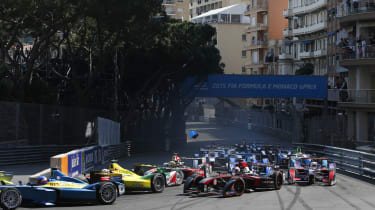 Sébastien Buemi (e.dams-Renault) claimed victory in the inaugural Monaco ePrix after starting from pole position. The Formula E field provided the 18,000 spectators in the Principality with their first chance to experience the exciting new world of all-electric formula motor racing.

The only man who succeeded in putting any pressure on the Swiss driver was Audi Sport ABT’s Lucas di Grassi. The Brazilian finished second after switching strategies to keep him safe from the challenge of compatriot Nelson Piquet Jr (NEXTEV TCR), who had to settle for third place. Buemi’s victory makes him the first driver in the championship to date to score a second victory, and the first to convert a pole position into a win.

Formula E’s visit to Monaco was a highly symbolic occasion. Like the first grand prix to be hosted by the Principality, back on April 14, 1929, it represents a landmark date for motor racing fans. It was also the perfect showcase for the 18-inch MICHELIN Pilot Sport EV tyre, developed specifically for the championship’s high-tech, electrically powered, single-seater cars.

Over the years, Michelin has recorded a high number of high profile successes in the Principality, from the World Rally Championship’s Rallye Monte-Carlo to the more recent alternative energy events and, today, the FIA’s all-electric Formula E series.

Michelin Motorsport Director Pascal Couasnon said: “Since the start of the season, Formula E has allowed us to confirm the performance potential and all-round capability of the MICHELIN Pilot Sport EV in a wide variety of conditions. The hazards we have encountered at the street circuits visited so far by the championship range from thick painted road markings and tram rails to different types of surface, including concrete, but our tyres have consistently delivered a blend of safety, performance and longevity. Here at Monaco, where the drivers found abrasive asphalt on a very sinuous track, the MICHELIN Pilot Sport EV showed once again all its longevity, keeping the level of performance high, lap after lap.”