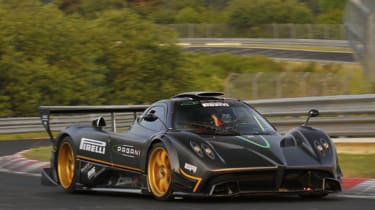 Pagani is claiming to have broken the Nurburgring Nordschliefe lap record. Yesterday a Zonda R driven by 'Ring specialist Marc Basseng recorded a 6min47sec lap time. This not only comprehensively beats the 6.58 lap time Ferrari achieved recently in a 599XX, but also the 6.48 record we helped set in a Radical SR8LM last year. As with the Ferrari, the Zonda R isn’t road legal, so like its Italian rival appears in the standings as a production-derived model.

This isn’t the first time Pagani has taken on the Green Hell. In October 2007 a Zonda F Clubsport recorded a 7.27.82 lap and a year later another F Clubsport took that down to 7.24.65.

This latest lap represents a huge time gain – and it’s understood that Marc Basseng believes there is even more to come from the car – perhaps as much as another eight seconds, in fact.