evo gaffer Harry Metcalfe talks us round his eye-grabbing Pagani Zonda C12S supercar on video. What's it like to own? 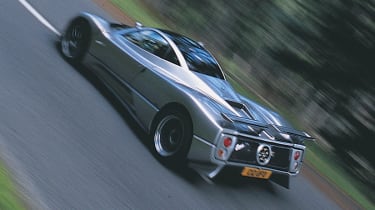 evo’s Harry Metcalfe has famously owned a Pagani Zonda C12S 7.3 since May 2006. As the car approaches its tenth birthday, we thought it was about time we got him to give us a guided video tour round his car, which started out life as the UK press car. Having covered 60,000km (or 37,300 miles), it’s led a very busy life since in its near-six years with Harry. It even has the dubious claim to fame of being the very first car a racing driver known as ‘the Stig’ drove on the opening episode of a certain TV show back in the summer of 2002. It has also featured on the cover of evo on numerous occasions, perhaps most famously when it took part in what turned out to be the world’s only Bugatti Veyron group test back in issue 96. (Click here for a video from that test).

In part one (click here) Harry gives us a walk around all the details on a Pagani Zonda only an owner would discover and then, in part two (below), he heads out onto the road and gives us a glimpse of what it’s like to drive one of the world’s fastest cars.