A freak incident with the battery cable cuts the Zonda dead in his tracks... 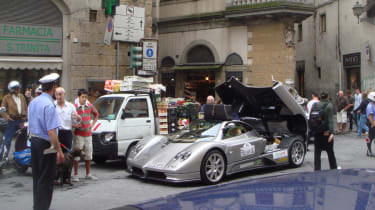 Oh no! Not now! That’s all I can think as my previously strident Zonda falls silent. There are dozens of supercars behind me, and to make matters worse the Chief of Police and two outriders are ahead, clearing a path and leading us the wrong way down Florence’s one-way streets to help speed our passage to the piazza right in the heart of town, where our cars will be on display tonight.

The Zonda hasn’t missed a beat all year so this is utterly unexpected. We were only doing 20mph or so on the cobbled streets, but suddenly there’s nothing, the car just dies. All I can do is coast to a stop. As the police wave traffic by, I delve into the electrics, wiggling relays and checking every fuse I can find, but everything looks fine so I dial the emergency number at the Pagani factory.

‘Hmm. Very strange…’ comes the response when I explain the problem. ‘I’m going to check with Horacio as I can’t see how this can happen.’

A few minutes later I get a call back to tell me that the only thing that can cause a total loss of power is a battery lead, so we do a bit more digging and, sure enough, the battery cut-off switch has a terminal hanging off it. A freak incident, but an easy fix – we bolt the lead to the remaining terminal and all is good again.

I’m in Florence for the start of the Giro d’Italia, a blast around some of the very best roads Italy has to offer. It’s an incredible event, organised by the UK-based SuperCar Club, and I’ve joined around 60 other supercar owners for the tour.

Just to give you a taste of it, no fewer than 50 of the cars taking part were collected from their owners’ garages in the UK and transported down to the outskirts of Florence (hence the police escort for the final few kilometres into town). The club also transports your bags for you (useful if you’ve no luggage space in your supercar), can organise replacement tyres for any of the cars taking part (we’re even followed around the route by mobile tyre-fitting squads), and has a team of mechanics on hand with a mobile workshop.

As you might expect, it’s not a cheap event to enter, the fees being £5250 per car plus a minimum donation of £3000 to the featured charity, Children with AIDS, who were nearly £250,000 richer by the end of the event. On top of that, the optional car transportation to and from the UK costs £910 each way. Even so, the waiting list for this and future events proves there's no shortage of takers for this sort of top-flight tour.

It’s certainly not often that a car like the Zonda feels ordinary, but with three other Paganis on the event, not to mention a couple of Ferrari F50s, an Enzo, a Carrera GT and a Spyker, plus several Lambos, Astons and SLRs and even a Maserati 200S once raced by Fangio, things are a little different here!

On the first morning we receive a map, some marker pens and the clue sheet for the day’s route ahead. If you like to start your morning by completing a crossword then you’ll be in your element. Me? I prefer a more relaxing start to the day, usually involving plenty of coffee, but at least these are the type of clues I can cope with. ‘Now on to an ear and little granny O.’ That’ll be Lugnano then. ‘A hidden human exit in plural.’ That’s Arsoli to you and me. You get the idea, I’m sure.

After you’ve got the route sussed, you’re free to leave for the day’s drive (usually around 240 miles), during which you can try to complete some of the other questions. The point is not about speed but more about being hyper- observant along the route.

It’s fun stuff, but as the tour progresses towards the finish in Monte Carlo in four days’ time it should all start to get more serious, with proper prizes on offer if you answer the questions correctly. The winning team gets a ‘Spirit of Ecstasy’ trophy and two Breitling Flying B watches.

The one thing the SuperCar Club can't arrange is the weather, and although each day starts bright and sunny, it rains every day from around 2pm onwards. The first day’s rain is of biblical proportions, forcing me to pull over at times as the roads get flooded by water. With the Zonda’s engine being in the back there’s little danger of it drowning, but when the car’s front spoiler starts sending water over the windscreen you know it’s time to take a break.

We head south of Rome on the second day, but my favourite driving roads in Italy still remain those through the open farmland to the south of Siena, which we cover on the first and third days. It’s still a relatively deserted area and the countryside is simply stunning to look out on.

Sadly I don’t get to complete the whole tour as I have to be back in the UK before the event finishes, so on the fourth day (out of six), as the other lucky competitors prepare to leave our Tuscan hideaway and travel to a hotel near Portafino, I head north to the Pagani factory near Modena.

By the time I arrive I’ve covered nearly 800 miles, bringing the total distance travelled since the Zonda was last here to 5410 miles, meaning another service is due. So the C12 S will stay at the factory for a couple of weeks’ TLC.I’m determined to go easy on any tasty extras on offer this time, but before I leave, Horacio insists that I go out with Davide, Pagani’s test driver, in the company’s development car – complete with paddle-shift gearbox. Afterwards Mr Pagani tells me that it would be relatively easy to retro-fit the system to my car as the clutch and gearbox remain the same. Oh, the temptation…