Sporty styling and revised interior for the Ceed, arriving early in 2019 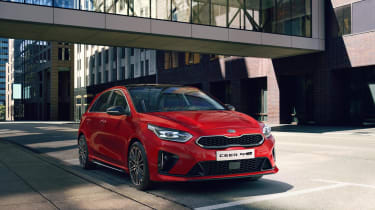 Kia has revived its sporty GT-Line trim level at the Paris motor show, available on both hatchback and Sportswagon versions of the Ceed and as the standard trim level on the recently revealed Proceed shooting brake.

Taking their inspiration from the 204bhp Ceed GT announced alongside the Proceed, regular Ceeds will be available with GT-Line trim with the three standard engine choices – a 1-litre turbocharged three-cylinder, a 1.4-litre turbocharged four-pot, and a four-cylinder, 1.6-litre turbodiesel in two power outputs.

Sportiest of the bunch will be the 1.4 petrol – the same unit as used in the Hyundai i30 N-Line. In that application it’s good for 130mph and 0-62mph in a shade under nine seconds. The 1.6 CRDi makes 134bhp in its more powerful guise, with a 113bhp version also available, while the three-cylinder produces 118bhp, with 127lb ft of torque.

A six-speed manual transmission is standard, while the larger petrol and the diesel are both optionally available with a seven-speed dual-clutch transmission. 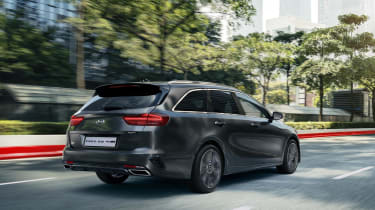 Primarily, though, GT-Line is a styling pack, and notably Kia doesn’t claim the same kind of chassis changes that Hyundai does with its i30 N-Line, though does note that GT-Line models have been developed for and engineered on European roads.

Visual changes include 17- or 18-inch alloy wheels, front and rear bumpers like those of the Ceed GT, a satin chrome and gloss black front grille, and redesigned front fog light surrounds with horizontal ‘blades’.

There are further changes inside, with a black rooflining in place of the standard grey, metal scuff plates, a flat-bottomed steering wheel and metal paddles for models with the dual-clutch gearbox.

> Kia Proceed GT revealed - a shooting brake for the masses

Front sports seats in cloth and synthetic leather are standard, too, with more heavily bolstered seats from the Ceed GT also available. Full leather trim, with heated and ventilated front seats and heated rears, is an option.

Along with this there’s the usual suite of safety and convenience features, JBL premium audio, CarPlay and Android Auto integration and a reversing camera.

Kia hasn’t yet revealed when exactly the model will hit the UK, nor how much it’ll cost when it does, though it’s set to go on sale in Europe in the first quarter of 2019, so expect more information later this year.