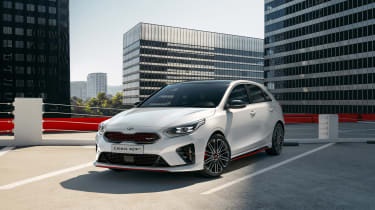 Kia has revealed a new flagship version of its Ceed hatch, featuring a punchier engine, unique styling and revised suspension set up. If you were hoping for Kia’s version of the Hyundai i30 N, however, you might be disappointed as its 204bhp power figure resolutely renders it a warm, rather than a hot hatchback. Pricing starts from £21,535 for the base 118bhp 1.0-litre GT-Line and goes up to £25,535 for the 1.6-litre 201bhp GT.

Featuring the same 1.6-litre turbocharged four-cylinder engine as the recently revealed Proceed GT, power stands at the aforementioned 204bhp, comparing favorably to higher-end versions of the new Ford Focus, Volkswagen Golf and Honda Civic. Instead, the new Ceed GT sits slightly above those rivals in power terms, but underneath full-bodied rivals such as the GTI, ST and Type R.

> Click here for more on the new Kia Proceed GT

As standard the Ceed GT is fitted with a six-speed manual gearbox, but is also available with a seven-speed dual clutch ‘box, with steering wheel-mounted paddles. 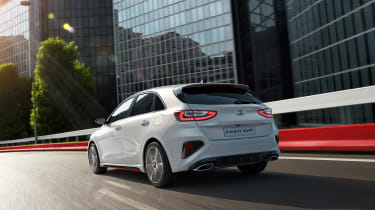 The GT has also picked up a tweaked suspension setup, overseen by Albert Biermann, who after his work with the i30 N has moved on to being in charge of Kia and Hyundai’s entire line up. Changes to the chassis include a 5mm reduction in ride height, increased spring rates on the front and rear axles, but a softening of the anti-roll bars to help maintain a smoother ride quality over rough surfaces.

The Ceed GT also has a redeveloped ESC system with a torque vectoring by braking system, and a bigger brake package with new 320mm discs.

Styling upgrades follow the standard hot hatch rulebook, so larger wheels and red pinstripes accompany larger intakes, and a fake rear diffuser. The standard Ceed is handsome enough, but these changes do make it look a little more assertive, if not quite as aggressive as an the i30 N.

With Hyundai flexing its engineering muscle with the i30 N, the elephant in the room is Kia’s distinct lack of a proper hot hatch offering, despite more serious models like the Stinger GT lurking further up the range. After a conversation with Biermann, it doesn’t appear that any major work is being made for a properly hot Ceed either, which is a shame as the i30 N has done plenty to wipe away the remnants of Hyundai’s cheap car image. Let’s see if a future Ceed will be able to achieve the same feat.