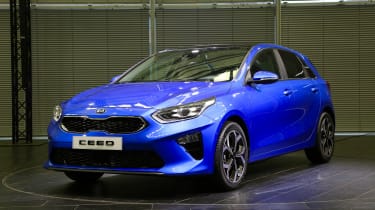 It seems a refreshing event when a manufacturer reveals an all-new non-SUV model. So despite the new Ceed’s sensible family hatch overtone, the fact Kia says the new family hatch has channelled in some of the Stinger’s dynamic qualities could make the new Ceed an interesting proposition.

Initial signs look promising as the Ceed, like its predecessor, has been designed and developed in Frankfurt. Lower, wider and longer than the old car, the new Ceed features a more cab-rear silhouette than before; a design theme typified by shortened front and lengthened rear overhangs. The Ceed has been designed under the watchful eye of Peter Schreyer, Chief Design Officer for Kia and Hyundai and the man responsible for the Korean’s increased focus on attractive design in recent years.

Under the skin, the new Ceed is built on the new K2 platform, with all models benefiting from independent rear suspension. Tuned specifically for European tastes, the European development team was tasked to make the Ceed Kia’s most dynamic hatchback yet, laying down some solid foundations for a possible future performance version. Previously, the Kia Ceed (or three-door pro_cee’d as it was called) was offered in a warm GT variant, but with the new models like the Stinger GT, as well as sister company Hyundai’s rather excellent i30 N, it’s not too far a stretch to imagine a proper hot hatch variant in the model's future. 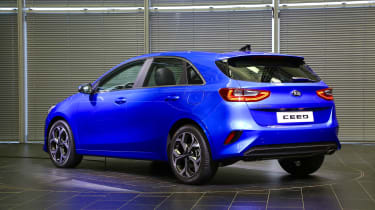 Initially though, the Ceed will be available with three petrol and two diesel engines with power outputs varying between 99bhp and 138bhp. The two diesels will comply with all the latest Euro 6d emission standards too, if not our general bias towards petrol engines. All engines will be connected to a 6-speed manual gearbox, although the top-level petrol and diesel models will also have a 7-speed dual clutch option.

As is the trend these days, a high mounted floating infotainment screen largely dominates the interior. The overall design is definitely in the ok rather than interesting basket, but looks solid and well appointed. Space should be bang on average too, although don’t expect any cavernous rear quarters thanks to the space-sapping multi-link rear suspension.

The Kia Ceed at this point then is hardly an evo-centric car, but then as opposed to the influx of compact SUVs, and the possibility of a warmer future offering, we’ll take one of these over a dull compact SUV any day. Production will start in May, with UK prices and an on-sale date still to be confirmed.