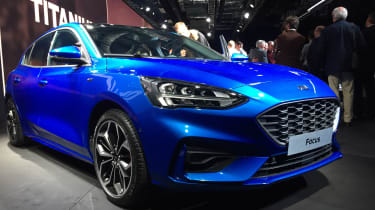 This is the all-new fourth-generation Ford Focus, the marque’s crucial new family hatch to rival the Volkswagen Golf, Vauxhall Astra and the new Mercedes-Benz A-class. But the new Focus has a tough task ahead, because as well as traditional hatchback rivals, it also has to compete with ever-growing marketplace of similarly priced compact SUVs vying for family car buyers.

To wade into this battle, Ford has developed the Focus on a brand new platform that will also underpin a range of forthcoming mid-sized Ford models. Following the Fiesta’s lead, the new Focus will be available with a range of trimlines including ST-Line, Vignale and quasi-SUV Active variants, too, in a move to try to diversify the model.

> Click here for our review of the Volkswagen Golf 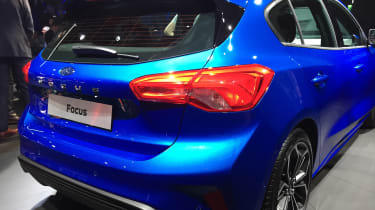 Ford has confirmed a next generation Focus ST will be available next year, utilising a turbocharged four-cylinder petrol engine. The next generation RS model should follow, with the inclusion of all-wheel drive, although executives hesitated to discuss timing. Ford will be introducing mild-hybrid Focus models in the near future but when pushed about whether it might go down a mild-hybrid route for its next Focus RS, execs would only confirm that the technology was in development.

The new Focus range starts at £17,930 for the entry-level ‘Style’ model, topping out at £25,450 for the Vignale. All models receive standard autonomous emergency braking, DAB digital radio and lane keep assist. New to the Focus is the ST-Line X model, adding 18-inch wheels, red brake calipers and more interior equipment from other high-range models. The Focus is on sale now, with deliveries reaching customers in September. ‘Active’ models will follow a few months later.

Alongside the sharp new look of the original 1998 Focus was an impressive dynamic package. Centre to this was the introduction of its ‘control blade’ independent rear suspension, an unusual application in the class at the time, helping the Focus forge its reputation as the most entertaining family hatchback to drive.

This latest Focus aims to live up to that same reputation, starting with the all-new chassis. Ford has started with the basics, increasing torsional rigidity by 20 per cent, while the suspension mounting points are 50 per cent stiffer than the previous model.

> Click here for our review of the Vauxhall Astra

A first for the new Focus is adaptive dampers called ‘CCD’, which not only adjust ride comfort depending on the selected drive mode, but continuously react to the road surface and its imperfections. Another function of the adaptive dampers is a pothole function, which will recognise when the front wheel is on the leading edge of a pothole and react by reducing the wheel drop on that specific corner. The rear wheel is then fed this information and pre-emptively reacts. 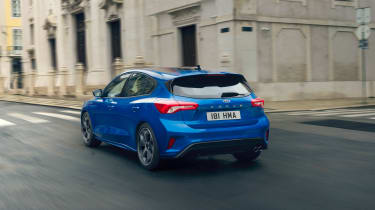 Ford has made the decision to offer smaller-engined models with a twist-beam rear suspension system (or a torsion bar to you and I), but will maintain independent rear suspension on the rest of the range. Sportier ST-Line models sit 10mm lower than standard cars, while the Active sits 30mm higher.

Powering the new Focus will be an initial offering of four engines – two petrol and two diesel. Both petrol engines are turbocharged three-cylinder units – the smallest is Ford’s 1-litre Ecoboost in 84, 99 and 123bhp forms. There is also an all-new 1.5-litre unit first seen in the upcoming Fiesta ST. Available with either 148 and 179bhp, the power output is a little off the Fiesta’s 197bhp, but they do share a combination of direct and port-injection, integrated exhaust manifolds and a world-first cylinder deactivation system fitted to a three-cylinder engine.

The diesel engines consist of a new 1.5-litre and the existing 2-litre four-cylinder EcoBlue units, producing between 94 and 148bhp. All four engines come with a six-speed manual gearbox as standard, with higher-powered models also available with the new eight-speed automatic gearbox. CO2 emissions are said to be improved by 10 per cent across the range, through a combination of these new drivetrains and weight reductions of up to 88kg model for model.

Ford has not made mention of a new ST or RS model, although we expect the former to be powered by a four-cylinder turbocharged petrol engine powering the front wheels, as per the current ST.

The exterior takes many design cues from the current Fiesta, looking recognisably ‘Ford’ with its gaping grille and swept-back headlights. Behind the familiar elements though, the Focus has been completely reshaped. The first move was to create a more cab-back stance by moving the A-pillars further back and lengthening the bonnet. This is combined with a more upright tailgate to create a silhouette more akin to rivals like the VW Golf and Peugeot 308, rather than the more MPV-like shape of the third-generation car.

Gone are the rear quarter windows, the rear doors now stretching towards the tailgate for improved rear ingress and egress. To go with the new, simplified shape are complex LED lighting signatures front and rear and a more flowing, less complex surfacing finish. 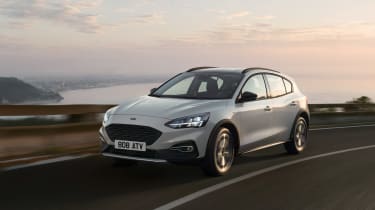 ST-Line cars adopt more aggressive bumper treatments and lower sills for a supposedly dynamic appearance, while Vignale models have a heavier-handed use of chrome on the front bumper and window surrounds. Active models get their own bumpers, too, as well as black plastic cladding and roof rails.

Equally revolutionary is the interior direction, which is based on the new architecture first seen in the Fiesta. One of the previous car’s weakest aspects, the new interior focuses on improved ergonomics and better integration of Ford’s Sync 3 infotainment system. As a result, the button count has significantly reduced, with most infotainment functions controlled through the touchscreen interface.

A set of physical air conditioning controls are still apparent, unlike some rivals. Automatic cars receive a new rotary controller and paddleshift combination, opening up more storage space in the centre console. 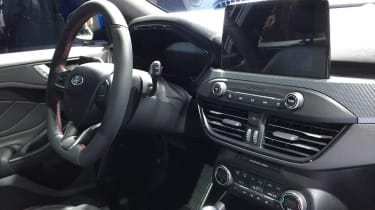 High-tech inclusions that are becoming increasingly common in this class such as full-digital dials and widescreen infotainment screens are notable by their absence, although active cruise control and the usual suite of active safety aids are included throughout the range.