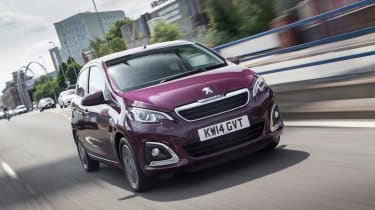 Three-cylinder engines tend to have a knack of being characterful – and to a point the Peugeot's does, but it is lacking in a few key areas. To start with, the 108’s overall engine refinement is distinctly average, starting up with less of a concise thrum and more of an accidental stumble into combustion. Vibration is quite pronounced from the driver's seat, so much so that the (overly tall) gearstick vibrated against a piece of trim so loudly, it almost drowned out the stereo.

The engine is relatively smooth, but quickly runs out of puff at higher revs, straining at anywhere above around 5,000rpm. This is not an unusual trait for a city car but being naturally aspirated, the engine leaves you with a fairly narrow powerband to work with. 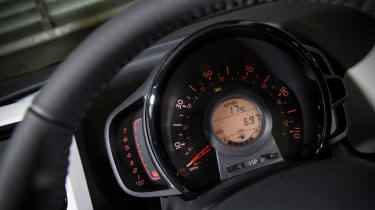 The gearbox is also quite vague, the sort that might have you hunting arround in search of third gear. With a bit of familiarisation you soon get used to it, but overall the drivetrain is an example of a common thread throughout the Peugeot 108 - namely that compared to rivals, it just doesn’t feel that well engineered. The VW Up (and its rebadged counterparts) feel far more sophisticated, and not just in the drivetrain department.