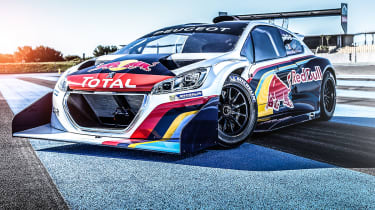 After teaming up with Red Bull for the specially-prepared Peugeot 208 T16 rally car (full details here), the final livery for this year's entry has been revealed - utilising the same famous Peugeot Sport stripes that adorned the side of the 205 and 405 T16 Pikes Peak cars.

Peugeot has been building up to this year's Pikes Peak hill climb, after announcing the company's return to the famous mountain rally stage earlier in the year. The mid-engined Peugeot boasts an 875bhp 3.2-litre twin-turbo V6, 875kg kerb weight and 0-62mph in 1.8sec.

Playing hard on the team’s association with the famous energy drink and nine-time WRC champion Sebastien Loeb, there’s no doubt that Peugeot is out to win the event, although with Pikes Peak ace driver Nobuhiro ‘Monster’ Tajima entering a similarly powerful Toyota GT86 – it could be a close fight.